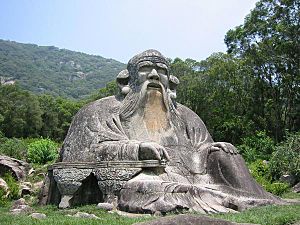 A stone sculpture of Laozi, located north of Quanzhou at the foot of Mount Qingyuan.

Laozi (Lao Tsu, Lao-Tze) was a Chinese philosopher best known for Taoism, the Daodejing, and for becoming a deity of Taoism and Chinese folk religions. A legendary figure of Chinese culture, Laozi may have lived during the Warring States period. Laozi's work influenced anti-authoritarian and Legalist philosophers.

What was his real name?

Many people of the Li family say they descended from Laozi. For example, the emperors of the Tang dynasty claimed this. This family was known as the Longxi Li lineage (隴西李氏). Although these are questionable, they show Laozi's impact on Chinese culture.

Was he even real? 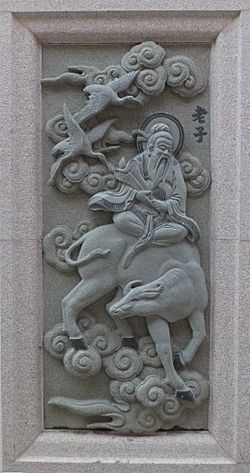 Some philosophers don't think he was real. Some think the Daodejing was "a compilation of Taoist sayings by many hands".

The first mention to Laozi is in the "Records of the Grand Historian" by Sima Qian. In one account, he was an official who lived around the time of Confucius. His name was "Er Li" or "Dan Li", and he wrote some a book with two parts before leaving west. In another, he has the name "Lao Laizi", and the book has 15 parts. In a third, he appears as a royal astrologer named "Lao Dan" living at the time of Duke Xian during the Qin Dynasty. The oldest Daodejing writing comes from around 375 BCE.

According to traditional accounts, Laozi worked as the Keeper of the Archives (librarian) during the Zhou. He was able to study the works of the Yellow Emperor and other classics. Laozi never opened a school but still had many students. There is a story of his meeting with Confucius (most famously in the Zhuangzi ).

He may have come from the village of Chu Jen in Chu.

Taoist myths state that Laozi was born when his mother looked at a falling star. He remained in her womb for 62 years while his mother was leaning against a plum tree. The Chinese name Li 李 is the Chinese character for "plum". Laozi was said to have been born as a grown man with a full grey beard and long ears, symbols of wisdom and long life. Other myths state that he was reborn 13 times after his first life during the days of Fuxi. In his last birth as Laozi, he lived 999 years and spent his life traveling to reveal the Tao.

In accounts where Laozi married, he was said to have had a son named Zong. They are separated when Zong is a child. Zong became a famous soldier and defeated many enemies. Laozi was teaching the Dao, and Zong learns Laozi is his father. Laozi says it is better to treat a beaten enemy with respect and that disrespect to the dead would cause his enemies to seek revenge. So Zong orders his soldiers to bury the enemy dead and hold funeral mournings. Lasting peace is then made.

Buddha and the origin of Daoism

Sima Qian says Laozi was tired of the moral decay in Chengzhou. The kingdom was declining. He traveled west and lived on the frontier until 80. He was recognized by the guard Yinxi at a western gate. Yinxi asked Laozi to write his wisdom. This became the Daodejing. But the present version of the text includes additions from later periods. In some versions of the tale, Yinxi liked the work so much that he became a student and left with Laozi, never to be seen again. In others, the "Old Master" traveled all the way to India and was the teacher of Siddhartha Gautama, the Buddha. Others say Laozi was the Buddha himself.

A seventh-century work, the Sandong Zhunang ("Pearly Bag of the Three Caverns"), said Laozi pretended to be a farmer when reaching the western gate, but was recognized by Yinxi, who asked to be taught by the great master. Yinxi wanted to find the Tao and said his long study of astrology allowed him to recognize Laozi. Yinxi was accepted by Laozi as a student. This shows the testing a seeker must undergo before being accepted as a student of a master.

Yinxi then trains. After completing the training, the two go to the western lands of the barbarians. They reached the highest religious rank in medieval Taoism called "Preceptor of the Three Caverns". Laozi is the perfect Taoist master and Yinxi is the ideal Taoist student. Laozi is the livingTao personified, teaching others for salvation.

The story of Laozi became religious since the Han dynasty. As Taoism became more popular, Laozi was worshipped as a god. The Way of the Celestial Masters became the first Taoist sect. Later Taoists view Laozi as the Dao in human form. Religious Taoism says that Laozi did not disappear after writing the Daodejing but spent his whole life traveling and revealing the Dao to others.

Laozi is traditionally regarded as the founder of Taoism. Popular Taoism typically presents the Jade Emperor as the main deity. Intellectual Taoists, such as the Celestial Masters sect, usually present Laozi (Laojun, 老君, "Lord Lao") and the Three Pure Ones at the main gods. 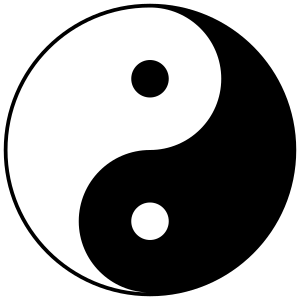 Laozi is traditionally regarded as the author of the Daodejing, but this is disputed. It is one of the most significant books in Chinese cosmogony. Like other ancient Chinese philosophers, Laozi often explains his ideas using paradox, analogy, ancient sayings, repetition, rhyme, and rhythm. In fact, the whole book can be read as an analogy: the ruler is the self, and the others and empire are the body, senses, and desires.

The Daodejing says the Dao is the source and ideal of all existence: it is unseen, very powerful but also very humble, being the root of all things. People have desires and free will. Many act "unnaturally", breaking the natural balance of the Dao. The Daodejing intends to lead students to "return" to their natural state, in harmony with Tao. Taoism views them language as biased and artificial and shows this through paradoxes.

Another example: technology may give a false sense of progress. Laozi says not to reject technology, but instead seek the calm state of wu wei (無爲), without desires. Laozi says rulers should keep their people ignorant or simple-minded. This may be political advice, but it could also be religious. The text uses terms like "valley spirit" (gushen) and "soul" (po).

Wu wei literally "non-action" or "not acting", is an important concept. The concept is multifaceted, and this is shown by how it can mean many different things and be translated in multiple ways; it can mean "not doing anything", "not forcing", "not acting" (as in movies or drama), "creating nothingness", "acting spontaneously", and "flowing with the moment".

It is used to explain ziran (自然), or harmony with the Tao. It says all ambition originates from the same source. Laozi used the term to mean simplicity and humility as key virtues, in contrast to selfishness. Politically, it means avoiding war, harsh laws and heavy taxes. Some Taoists see a connection between wu wei and esoteric practices, such as zuowang (坐忘, "sitting in oblivion", emptying the mind of thought) found in the Zhuangzi.

Laozi and Zhuangzi influenced many people throughout Chinese history. Zhuangzi was Laozi's most famous follower. Zhuangzi had a great deal of influence on Chinese scholars, bureaucrats, and culture. Politicians have used Laozi's philosophies to deny serving their ruler. They valued humility in leadership and limited government. This was either out of morality or for their own political means. Some anti-authoritarian movements used Laozi teachings to represent the power of the weak.

Laozi supported limited government. Left-libertarians have been influenced by Laozi. In his 1937 book Nationalism and Culture, the anarcho-syndicalist writer Rudolf Rocker praised Laozi's "gentle wisdom" and understanding that sometimes political power opposed culture and the community. In his 1910 article for the Encyclopædia Britannica, Peter Kropotkin said Laozi was one of the earliest supporters for anarchism. Many anarchists like Ursula K. Le Guin have used Laozi to justify their beliefs. Le Guin writes that Laozi "does not see political power as magic. He sees rightful power as earned and wrongful power as usurped... He sees sacrifice of self or others as a corruption of power, and power as available to anyone who follows the Way. No wonder anarchists and Taoists make good friends."

All content from Kiddle encyclopedia articles (including the article images and facts) can be freely used under Attribution-ShareAlike license, unless stated otherwise. Cite this article:
Laozi Facts for Kids. Kiddle Encyclopedia.