His best known book, Being and Time, is considered one of the most important philosophical works of the 20th century. It is a very difficult book, even for the German reader. 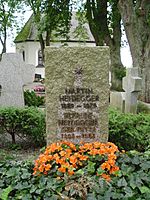 In it, and later works, Heidegger maintained that our way of questioning defines our nature. But philosophy, western civilization's chief way of questioning, has lost its way. Finding ourselves "always already" fallen in a world of presuppositions, we lose touch with what being was before its truth became "muddled". As a solution to this condition, Heidegger advocated a return to practical life in the world, allowing it to reveal, or "unconceal" itself.

All content from Kiddle encyclopedia articles (including the article images and facts) can be freely used under Attribution-ShareAlike license, unless stated otherwise. Cite this article:
Martin Heidegger Facts for Kids. Kiddle Encyclopedia.