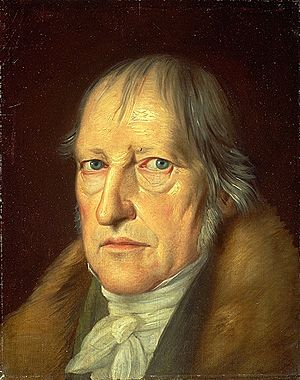 Georg Wilhelm Friedrich Hegel (August 27, 1770 – November 14, 1831) was a German philosopher born in Stuttgart, Württemberg, which is now southwest Germany. He started Hegelianism and is a part of German Idealism. He influenced many writers and philosophers, including those who agreed with him (Bradley, Sartre, Küng, Bauer, Stirner, Marx), and those who did not agree with him (Kierkegaard, Schopenhauer, Nietzsche, Heidegger, Schelling). Hegel's books are difficult to read and deal with many different ideas at the same time. He has written about history, politics, religion, art, logic and metaphysics.

All content from Kiddle encyclopedia articles (including the article images and facts) can be freely used under Attribution-ShareAlike license, unless stated otherwise. Cite this article:
Georg Wilhelm Friedrich Hegel Facts for Kids. Kiddle Encyclopedia.