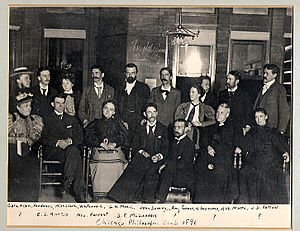 The "Chicago Club" including Mead, Dewey, Angell, and Moore. Pragmatism is sometimes called American Pragmatism because so many of its proponents were and are Americans.

Pragmatism considers words and thought as tools and instruments for prediction, problem solving and action, and rejects the idea that the function of thought is to describe, represent, or mirror reality. Pragmatists contend that most philosophical topics—such as the nature of knowledge, language, concepts, meaning, belief, and science—are all best viewed in terms of their practical uses and successes. The philosophy of pragmatism "emphasizes the practical application of ideas by acting on them to actually test them in human experiences". Pragmatism focuses on a "changing universe rather than an unchanging one as the idealists, realists and Thomists had claimed".

All content from Kiddle encyclopedia articles (including the article images and facts) can be freely used under Attribution-ShareAlike license, unless stated otherwise. Cite this article:
Pragmatism Facts for Kids. Kiddle Encyclopedia.