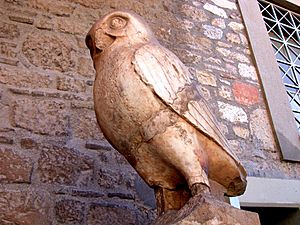 An owl on the Akropolis in Athens

Ancient philosophy refers to the philosophies of Ancient China, Greece, Rome, India, Iran, etc. These places had large empires before 200 BC. This time is sometimes called the Axial Age of thought.

Ancient philosophy in Europe refers mainly to that of Ancient Greece and Ancient Rome. Diogenes Laërtius, a 3rd-century scholar wrote Lives and Opinions of Eminent Philosophers, which summarized the position of many Ancient Greek philosophers. This work was translated into Latin and meant that Ancient Greek philosophy remained known even after Library of Alexandria lost its influence. Most of Ancient philosophy was forgotten after the 6th century. After this, it was mainly through Islamic thinkers such as Avicenna (11th century), Averroës (12th century), or the Jewish philosopher Maimonides (12th century) that Ancient philosophy became known again. Medieval philosophy, such as that of Albertus Magnus (13th century) or Thomas Aquinas meant that the works of thinkers such as Aristotle were well known.

All content from Kiddle encyclopedia articles (including the article images and facts) can be freely used under Attribution-ShareAlike license, unless stated otherwise. Cite this article:
Ancient philosophy Facts for Kids. Kiddle Encyclopedia.