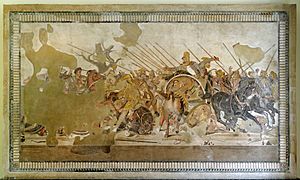 Apelles of Kos ( Greek: Ἀπελλῆς; fl. 4th century BC) was a renowned painter of ancient Greece. Pliny the Elder, to whom much of modern scholars' knowledge of this artist is owed (Naturalis Historia 35.36.79–97 and passim), rated him superior to preceding and subsequent artists. He dated Apelles to the 112th Olympiad (332–329 BC), possibly because he had produced a portrait of Alexander the Great.

All content from Kiddle encyclopedia articles (including the article images and facts) can be freely used under Attribution-ShareAlike license, unless stated otherwise. Cite this article:
Apelles Facts for Kids. Kiddle Encyclopedia.