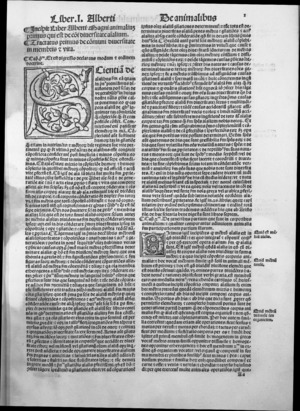 Albertus Magnus, O.P. (1193/1206 – November 15, 1280), also known as Albert the Great and Albert of Cologne, is a Catholic saint. He was a German Dominican friar and a bishop who achieved fame for his comprehensive knowledge of and advocacy for the peaceful coexistence of science and religion. James A. Weisheipl and Joachim R. Söder have referred to him as the greatest German philosopher and theologian of the Middle Ages, an opinion supported by contemporaries such as Roger Bacon. Magnus was born into a rich German family, in Swabia, in about 1200. He attended Padua University, in Italy. He was very knowledgeable about Sciences, and he wrote about chemistry, geometry, astronomy, physiology. He promoted Aristotle's writings. He later became Master of Theology, which is the study of religion and God, in the University of Paris. He also created a school in Cologne, in 1248. Magnus died on November 15, 1280, in Cologne, Germany. 250 years after his death, he was named a Saint because he helped and contributed to the Catholic Church.

All content from Kiddle encyclopedia articles (including the article images and facts) can be freely used under Attribution-ShareAlike license, unless stated otherwise. Cite this article:
Albertus Magnus Facts for Kids. Kiddle Encyclopedia.