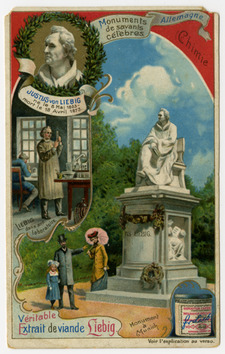 Liebig's Extract of Meat Company, established in the United Kingdom, was the producer of LEMCO brand Liebig's Extract of Meat and the originator of Oxo meat extracts and Oxo beef stock cubes. It was named after Baron Justus von Liebig, the 19th-century German organic chemist who developed and promoted a method for industrial production of beef extract. 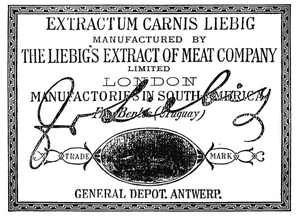 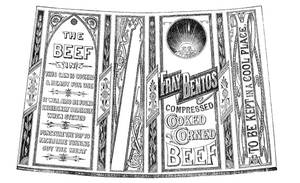 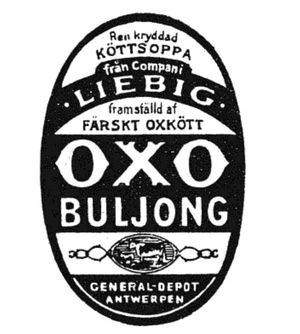 Liebig's meat extract is a molasses-like black spread packaged in an opaque white glass bottle, which contains reduced meat stock and salt (4%). The ratio of meat to meat extract is generally reported to be about 30 to 1: it takes 30 kg of meat to make 1 kg of extract. The extract was originally promoted for its supposed curative powers and nutritional value as a cheap, nutritious alternative to real meat. However (wrote Mark R. Finlay), beginning in mid-1865

the assumption that Liebig's Extract of Meat was extremely nutrituous came under heavy attack. Dozens of articles and analyses were published on the issue... In fact, most studies proved that Liebig's meat extract contained virtually no trace of fats, gelatines and proteins; in brief, it lacked the very basis of meat's nutritive value. Most experts soon agreed that meat extract 'must be placed exceedingly low in the scale of direct or absolute nutrients'.

A German physiologist found that dogs died if fed exclusively on extract of meat. As research brought its nutritional value into question, its convenience and flavourfulness were emphasized, and it was marketed as a comfort food. Liebig and his supporters admitted the extract contained virtually no fats and proteins, but said the purpose of the process was to extract flavour. In a change of marketing strategy, it was promoted as a stimulant.

The product enjoyed immense popularity and became a staple in middle-class European households. By the late 1860s, St. Thomas Hospital in London reportedly used 12,000 pots per year of the easily digestible substance. By 1875, 500 tonnes of the extract were being produced at the Fray Bentos plant each year. It was recommended for soldiers during the American Civil War for its shelf stability, ease of transport, and ease of use. It was still used by the Allied forces in World War II. European adventurer Sir Henry Morton Stanley valued it on his trip to Africa. It is still sold by Liebig Benelux.

In 1873, Liebig's began producing tinned corned beef, which it sold under the label Fray Bentos. "Fray Bentos" was trademarked by Liebig in 1881 to market "Fray Bentos Compressed Cooked Corned Beef". With the introduction of freezer units, the company was eventually able to produce and export frozen and chilled raw meat as well. The amount of food processed and shipped around the world caused the town of Fray Bentos to be called "The Kitchen of the World".

Fray Bentos canned meats, now owned by Baxters, are still sold in Europe. The brand also offers meat pies, which have been manufactured since 1958.

The company also worked with English chemist Henry Enfield Roscoe to develop a cheaper meat extract product which it commercialized some years after Liebig's death. "Oxo" was registered as a trade mark in many countries. Originally a liquid, Oxo was released as a bouillon cube in 1911.

Liebig also produced a line of biological products under the Oxoid name (starting in 1924), in particular glandular extracts and later dehydrated culture media.

The works and yards at Fray Bentos ranked among the largest industrial complexes in South America in Uruguay and helped usher in the industrial revolution there. The city of Fray Bentos grew simultaneously with the factory. The plant played a major role in the development of Uruguay's cattle sector, which is still one of the country's main sources of export products. It attracted many European immigrants and, in its heyday, had 5,000 employees. It is said that an animal was processed every five minutes. Every part of the animal was used.

In 1964, a typhoid outbreak in Aberdeen was traced to Fray Bentos corned beef. Investigations into the 1964 Aberdeen typhoid outbreak revealed that the cooling water used in the canning process at the plant was not being consistently chlorinated. Meanwhile, Britain's entry into the Common Market affected trade patterns. These factors combined had a serious negative impact on sales, and in 1971, the complex was given to the Uruguayan government. The plant's viability never recovered and the production ceased completely in 1979, a major blow to the area's residents. 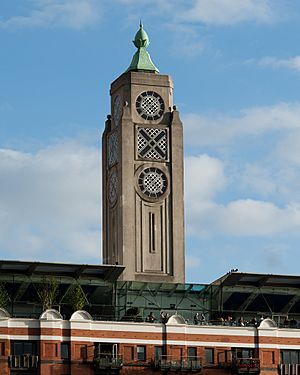 In the 1920s, the Liebig's Extract of Meat Company acquired the Oxo Tower Wharf on the south bank of the river Thames in London. There they erected a factory, demolishing most of the original building and preserving and building upon the riverside frontage.

The Liebig Extract of Meat Company was acquired by the Vestey Group in 1924 and the factory was renamed Frigorífico Anglo del Uruguay, also known as El Anglo. The company's assets included over 2-3 million hectares of farm land and herds of cattle in Argentina, Uruguay, Paraguay, Rhodesia, Kenya and South Africa. Liebig merged with Brooke Bond in 1968, which was in turn acquired by Unilever in 1984, followed by Campbells Soup, who sold the UK operation to Premier Foods in 2006.

In the meantime, Oxoid had moved to its own facilities in Basingstoke. Oxoid was purchased by Unilever and joined their Medical Products group as Unipath. In 1997, Oxoid became independent through management buy-out and in 2000, PPMVentures, a subsidiary of Prudential Plc, bought a majority stake. In 2004, Oxoid Ltd was purchased by Fisher Scientific with the Oxoid board of directors sharing £30 million in cash and company shares. Following the merger of Fisher Scientific with Thermo Electron Corporation in November 2006, Oxoid Ltd (along with Remel Inc) became the Microbiology Division of Thermo Fisher Scientific. 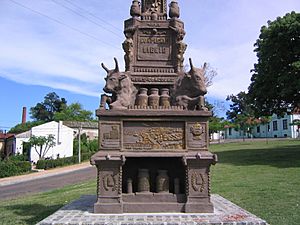 The Museo de la Revolución Industrial (Museum of the Industrial Revolution) is housed in the former works and yards at Fray Bentos. Thousands of people worked in the Frigorífico Anglo del Uruguay, which increased and diversified the use of agricultural products. When it was shut down, the municipality decided to create a museum which would displaying the original machinery, as well as social and cultural artifacts of the technological revolution in Fray Bentos. Dr. Sue Millar, president of the International Cultural Tourism Committee (ICOMOS), said: “Thus there is the chance to save time and massive expenditure on conservation, to retain the exceptional scope and variety of the 19th and 20th century British manufacturing and engineering machinery.” The site has been proposed as a possible UNESCO World Heritage site.

The museum is open for tourism and education, displaying the machinery used in the meat and extract of meat processing, the buildings, an 1893 Merryweather water pumping machine, a complete canning plant, a meat-cooking plant, and laboratory full of chemicals and chemistry jars, flasks and stoves. The museum collection contains hundred of photos and glass negatives detailing working life at Liebig's.

Colorful calendars and trading cards were also marketed to popularize the product. Liebig produced many illustrated advertising products: table cards, menu cards, children's games, free trading card sets, calendars, posters, poster stamps, paper and other toys. In 1872, they began to include sets of trading cards featuring stories, historical tidbits, geographic tidbits, and so on. Many famous artists were contacted to design those series of cards, which were first produced using true lithography, then litho chromo, chromolithography, and finally offset printing. The cards remain popular with collectors and are often collected in albums.

A set usually consisted of six cards, grouped around a particular theme. This example set includes chemists both ancient and modern. One card features Liebig and his laboratory of students.

All content from Kiddle encyclopedia articles (including the article images and facts) can be freely used under Attribution-ShareAlike license, unless stated otherwise. Cite this article:
Liebig's Extract of Meat Company Facts for Kids. Kiddle Encyclopedia.