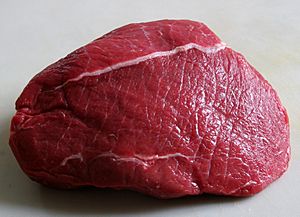 Brisket in its natural state

Corned beef is beef that is first pickled in brine and then cooked by simmering. Usually, cuts of meat are used that feature long muscle grain, such as the brisket.

The name corned beef is due to a coarse salt used in the pickling process. Corn originally meant grain, as in a small particle of something, and referred to the corns of salt.

In the United States and Canada 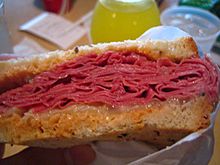 In the United States, corned beef is often purchased at delicatessens. Perhaps the most famous sandwich made with it is the Reuben sandwich, consisting of corned beef, Swiss cheese, sauerkraut, and Russian dressing on rye bread and then grilled on a flat griddle or cast iron pan. It is served hot. 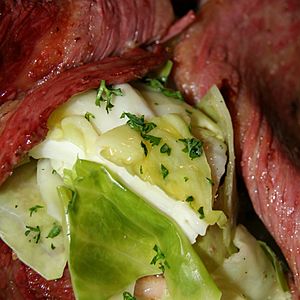 It is also associated with Saint Patrick's Day when Irish Americans eat a traditional meal of corned beef and cabbage. According to the History Channel, while cabbage has long been a traditional food item for the Irish, corned beef serving as a substitute for Irish bacon first became traditional in the late 1800s. Irish immigrants living in New York City's Lower East Side sought an equivalent in taste and texture to their traditional Irish bacon (similar to Canadian bacon), and learned about this cheaper alternative to bacon from their Jewish neighbors. 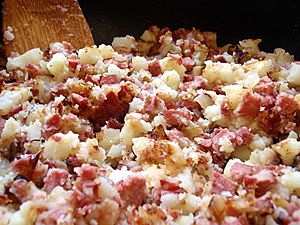 Corned beef hash is commonly served as a breakfast food with eggs and hash browns.

Smoking corned beef, usually with the addition of extra spices such as black pepper, produces a cold cut known as pastrami, or, in Canada, smoked meat.

In the United Kingdom corned beef is commonly found in the canned form, and when served "loose" at a counter is sliced from canned meat. It is usually regarded as a "cheap" foodstuff. Most of it is sourced from Brazil and Argentina. It is common in the United States in this form, as well. In the British Army and Royal Navy it has been a staple component of rations since before World War I, and is known as bully-beef. American style corned beef is also available in the United Kingdom from Jewish delicatessens. It is known as salt beef. 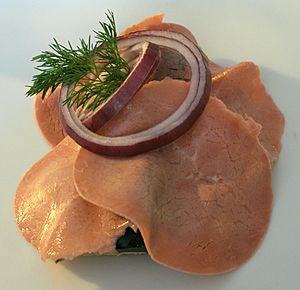 In Denmark corned beef is alternatively known as either saltkød (lit. "cured meat") or sprængt oksebryst (lit. "lightly salted beef brisket"). Traditional uses of the two are distinctive. Saltkød is used as a cold cut (pålæg), and figures prominently in the famous Danish open sandwich, smørrebrød, called Dyrlægens natmad (lit, "Veterinarian's midnight snack")— On a piece of dark rye bread, a layer of liver paté (leverpostej) is topped with a slice of corned beef (salt kød) and a slice of meat aspic (sky). This is all decorated with raw onion rings and cress. Sprængt oksebryst, on the other hand, is often served warm, as well as cold. It is traditionally served warm with boiled potatoes, horseradish sauce and pickles, a mixture of chopped, pickled vegetables (cauliflower, carrots, onion) in a yellow gelatinous sauce.

Place the meat into a sealable tub, such as a large bucket. Mix the remaining ingredients together and pour over the meat. Seal the tub and optionally refrigerate for three to four days. Finally, slow-cook the meat until it reaches an internal temperature of 160-180°F, either in a crock pot set to low, an oven set to 225°F, or in a smoker.

All content from Kiddle encyclopedia articles (including the article images and facts) can be freely used under Attribution-ShareAlike license, unless stated otherwise. Cite this article:
Corned beef Facts for Kids. Kiddle Encyclopedia.