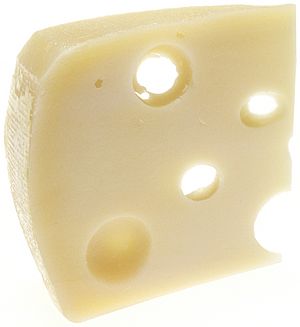 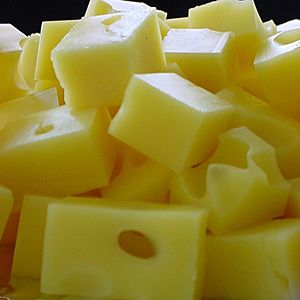 Swiss cheese is a group of cheeses with holes in them. These cheeses got their name because they look like Swiss Emmental cheese.

Swiss cheese is famous for having holes. The holes are created by the bacteria which change milk to Swiss cheese. Propionibacter uses the lactic acid which is produced by other bacteria, and produces carbon dioxide gas; the gas slowly forms bubbles which makes the holes. The holes of the cheese are called the "eyes", and a Swiss cheese which does not have holes is called a "blind" cheese.

In general, Swiss cheeses with larger eyes have a better taste. This is because the same factors that make the eyes larger, make the taste of the cheese better too. These factors include longer time and higher temperature given to the cheese to form.

All content from Kiddle encyclopedia articles (including the article images and facts) can be freely used under Attribution-ShareAlike license, unless stated otherwise. Cite this article:
Swiss cheese Facts for Kids. Kiddle Encyclopedia.