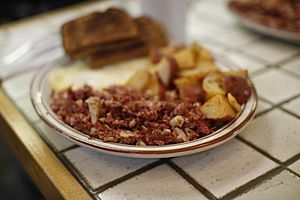 An order of corned beef hash for breakfast

Hash is a culinary dish consisting of chopped meat, potatoes, and fried onions. The name is derived from French: hacher, meaning "to chop". It originated as a way to use up leftovers. In the USA by the 1860s, a cheap restaurant was called a "hash house" or "hashery."

Canned corned beef hash became especially popular in countries such as Britain, France, and the United States, during and after the Second World War as rationing limited the availability of fresh meat.

High-end restaurants offer sophisticated hash dishes on their menus. Modern preparations can be made with unconventional ingredients such as lamb, fish, venison, turkey, chicken, shrimp, or steak. 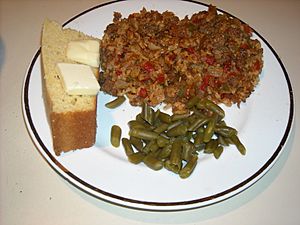 "Hash" of many forms was part of the American diet since at least the 18th century, as is attested by the availability of numerous recipes and the existence of many "hash houses" named after the dish. In the United States, September 27 is "National Corned Beef Hash Day."

Classic American corned beef hash originated in the New England region of the United States as a way to use up the leftovers from a traditional boiled dinner of beef, cabbage, potatoes, and onions. A red flannel hash is made with beets instead of potatoes. Fish hash, including salt cod hash, has been observed in historical New England cuisine.

In the Midwest it was common to bind a hash together with a white sauce thickened with flour.

Alternatively, in the southern United States, the term "hash" may refer to two dishes:

Some areas in the South also use the term hash to refer to meat, such as wild game, that is served as barbecue or pulled meat that is boiled first.

As early as the 14th century, English people were making hache or hachy. According to cookbook author Steven Raichlen, "The English diarist Samuel Pepys waxed grandiloquent about a rabbit hash he savored in 1662".

An 18th century recipe for "excellent hash" was made by preparing a seasoned roux with herbs and onion, cayenne, mace and nutmeg, then adding to it broth or gravy and stirring in mushroom catsup. In this sauce the cold beef would be simmered over gentle heat. Simpler recipes would omit some of the fancier ingredients like mushroom catsup and add filling root vegetables like carrots and boiled potatoes.

"Norman hash" was a dish of gravy and onions served over slices of leftover roast beef.

Hash in Denmark, known in Danish as "biksemad" (roughly translated, "tossed together food"), is a traditional leftover dish usually made with pork, potato, and onion, and served with a fried egg, Worcestershire sauce, pickled red beet slices, and ketchup or Bearnaise sauce. The coarsely-diced ingredients, rather than being mashed into a paste, are readily discernible in their cooked form. A beef variant is known as "Royal hash", and a Southern Jutland regional dish including cream and served over pommes frites as "King Frederik's favorite".

In Sweden, there is a version of hash called pyttipanna (put-in-pan) and in Finland, pyttipannu and Norway, pyttipanne. It is similar to the Danish version. The Swedish variety Pytt Bellman calls specifically for beef instead of other meats and adding cream to the hash. It is named after Sweden's 18th century national poet Carl Michael Bellman.

In Austria and perhaps more specifically Tyrol, there exists a similar dish called "Gröstl", usually consisting of chopped leftover meats (often being pork sausage), potato and onions fried with herbs (typically marjoram and parsley) and then served topped with a fried egg.

In Slovenia it is called ''haše'' and very often used as a spaghetti sauce. It is made out of minced pork and veal meat, potato sauce, onion, garlic, flour and spices.

In Spanish, Portuguese and Latin American cuisines, there is a similar dish called picadillo (Spanish) or carne moída (Portuguese). It is made with ground meat (usually beef), tomatoes (tomato sauce may be used as a substitute), vegetables and spices that vary by region (the Portuguese and Brazilian version is generally carne moída refogada, very heavy on garlic, in the form of an aioli sofrito called refogado, and often also heavy on onion and bell peppers). It is often served with rice (it can be fried in aioli sofrito if those who will eat have a strong fondness for garlic), as well as okra, in the form of quiabo refogado—okra fried in an aioli sofrito, just as the hash itself and the collard greens used in feijoada—, in Brazil, there constituting a staple) or used as a filling in dishes such as tacos, tostadas, or as a regular breakfast hash with eggs and tortillas (not in Brazil and Portugal). In Brazil and Portugal, it is used as bolognese sauce for pasta, and also used as a filling for pancake rolls, pastel (Brazilian pastry empanada), empadão and others (not with okra as it is far too perishable to be used in a fill for fast food and its consumption together with wheat flour-based foods often does not fit cultural tastes). The name comes from the West Iberian (Spanish, Leonese and Portuguese) infinitive verb picar, which means "to mince" or "to chop".

In Germany, Labskaus is made with beef or corned beef minced with onions and boiled potatoes and fried in lard. Beetroot and herring may be added, or served as a side dish.

All content from Kiddle encyclopedia articles (including the article images and facts) can be freely used under Attribution-ShareAlike license, unless stated otherwise. Cite this article:
Hash (food) Facts for Kids. Kiddle Encyclopedia.