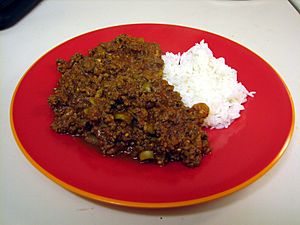 Picadillo ( "mince") is a traditional dish in many Latin American countries and the Philippines. It is made with ground meat (most commonly beef), tomatoes (tomato sauce may be used as a substitute), and also raisins, olives, and other ingredients that vary by region. It is often served with rice (hence it is commonly known in the Philippines as arroz a la cubana, "Cuban-style rice") or used as a filling in dishes such as tacos, savory pastries or croquettes. The name comes from the Spanish word picar, meaning "to mince".

A 19th century recipe from California for pasteles a la argentina is given for a filled pastry with layers of beef picadillo and chicken cooked in a green chili and onion sauce with olive oil and raisins. "Picadillo" was not always made with beef; "picadillo de ave" was a minced fowl with white sauce. Pasteles de pollos y pichones (chicken and squab pastry) was made as a savory pie with alternating layers of chicken and squab with a picadillo of minced veal, bacon, ham fried in lard with onion, mushrooms, apples, artichokes, tomatoes, and a layer of seasonings.

Costa Rican versions always include the name of the vegetable that represents the main ingredient to the dish (potato picadillo, ayote picadillo, etc.) and that is chopped and cooked with bell peppers, onions, stock, herbs and spices. It can include some type of protein but that is not essential. It is often served with tortillas or rice.

Cuban versions include peppers, onions, garlic, oregano, cumin, tomato sauce, stock, olives, raisins, and on occasion potatoes, and capers, and is usually sauteed in olive oil and white wine, depending on the region. Cuban picadillo is served with black turtle beans and rice.

In the Dominican Republic it includes peppers, onions, cilantro, garlic, tomato paste, bouillon cube, and may include olives, capers, raisins, hard-boiled egg. It is served over rice or used as a filling for pasteles, empanadas, kibbeh, and cabbage rolls.

In Puerto Rico it is used as a filling for empanadas, alcapurria, piononos and other fritters. It can also be served with rice and beans. The ground meat is sauteed with annatto oil, ham, cumin, oregano, bay leaf, recaito, tomato sauce and on occasion cheese, raisins, beans, olives, capers, potatoes, other spices and herbs. Tomato sauce acts as a glue binding the meat to all the other ingredients. This makes it the meat filling more playable.

In the Philippines, picadillo is a soupy dish traditionally made with ground beef and either potatoes or chayote. There are also drier versions of the dish. It is also called giniling, Tagalog for ground meat. What Cubans call picadillo is known as arroz a la cubana to Filipinos. In Cuba, arroz a la cubana and picadillo are understood as separate dishes instead of the same, with the former being rice cooked in tomato sauce and served with egg and plantain. The Philippine version is similar to normal Latino picadillo usually made with raisins, tomato sauce and diced potatoes added, but without green olives and capers, and is often served with white rice, fried plantains (maduros in Spanish, saging na saba in Filipino) on the side, and a fried egg on top. Boiled eggs are also eaten with the dish.

Due to the vast size of Mexico, there are considered to be 7 regions of Mexican Cuisine. In the North region Picadillo is made simply with fresh tomatoes, onions, ground meat, beef broth, potatoes, and usually seasoned with salt, pepper and cumin. Many people wrap it in a tortilla, or eat it with corn chips and salsa.

In some parts of Mexico,[where?] the dish usually calls for onions and lime to be stirred into the meat while it cooks. The sauce is sometimes sweetened by adding sugar to the pan that the meat and sauce are being fried in or, more recently, by using honey, giving the finished meal a somewhat teriyaki or bulgogi like taste. Raisins may also be added to taste. In some coastal or indigenous areas, seafood, ranging from shellfish to tuna, is substituted for the beef.

In other parts of Mexico, picadillo is made with blended guajillo chiles, and sautéed onions and tomatillos.

All content from Kiddle encyclopedia articles (including the article images and facts) can be freely used under Attribution-ShareAlike license, unless stated otherwise. Cite this article:
Picadillo Facts for Kids. Kiddle Encyclopedia.