Chayote (Sechium edule), also known as mirliton, pipinola and choko, is an edible plant belonging to the gourd family, Cucurbitaceae. Chayote was one of the several foods introduced to the Old World during the Columbian Exchange. Also during this period, the plant spread from Mesoamerica to other parts of the Americas, ultimately causing it to be integrated into the cuisine of many other Latin American nations.

The chayote fruit is mostly used cooked. When cooked, chayote is usually handled like summer squash; it is generally lightly cooked to retain the crispy consistency. Raw chayote may be added to salads or salsas, most often marinated with lemon or lime juice, but is often regarded as especially unpalatable and tough in texture. Whether raw or cooked, chayote is a good source of vitamin C.

Although most people are familiar only with the fruit as being edible, the root, stem, seeds and leaves are edible as well. The tubers of the plant are eaten like potatoes and other root vegetables, while the shoots and leaves are often consumed in salads and stir fries, especially in Asia.

The common American-English name of the fruit (outside of Louisiana) is from the Spanish word chayote, a derivative of the Nahuatl word chayohtli. (Chayote is also the term used in Puerto Rico.) In Louisiana, (as in Haiti), it is known as mirliton (pronounced) also spelled mirletons or merletons (plural—the r is often silent, e.g. Cajun me-lay-taw or urban Creole miʁl-uh-tɔ̃ns) In Australia, New Zealand and Singapore, it is known as choko which comes from the 19th century Cantonese market gardeners who introduced many vegetables into the former two countries.[citation needed] In the eastern Caribbean it is known as christophene, while it is chou chou in Jamaica (and tayota in the Dominican Republic). In other parts of the world, the name is often chou chou (e.g. in Mauritius and Réunion), or a variant thereof (e.g. chuchu in Brazil). In India, the vegetable is called chow chow or "Ishkush" in Nepali among other names; in the east and north east, it is simply known as squash and is a very popular vegetable used in both vegetarian and non vegetarian dishes.

Like other members of the gourd family, chayote has a sprawling habit, and requires sufficient room. The roots are also highly susceptible to rot, especially in containers, and the plant in general is finicky to grow. However, in Australia and New Zealand it is an easily grown yard or garden plant, set on a chicken wire support or strung against a fence. In Trinidad and Tobago, it is grown in the mountainous areas strung from wire lines.

The plant was first recorded by modern botanists in P. Browne's 1756 work, the Civil and Natural History of Jamaica. Swartz included it in 1800 in its current genus Sechium. 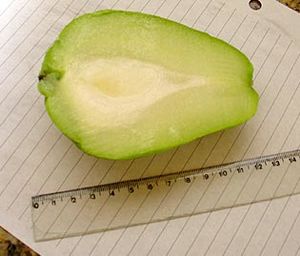 In the most common variety, the fruit is roughly pear-shaped, somewhat flattened and with coarse wrinkles, ranging from 10 to 20 cm in length. It looks like a green pear, and it has a thin, green skin fused with the green to white flesh, and a single, large, flattened pit. Some varieties have spiny fruits. The flesh has a fairly bland taste, and a texture is described as a cross between a potato and a cucumber.

The chayote vine can be grown on the ground, but as a climbing plant, it will grow onto anything, and can easily rise as high as 12 meters when support is provided. It has heart-shaped leaves, 10–25 cm wide and tendrils on the stem. The plant bears male flowers in clusters and solitary female flowers. The plant’s fruit is light green and elongated with deep ridges lengthwise. 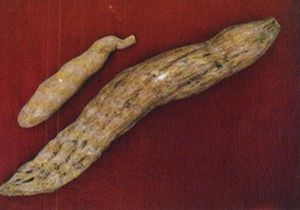 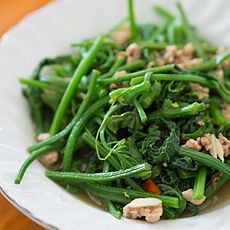 The fruit does not need to be peeled to be cooked or fried in slices. It has a very mild flavor. It is commonly served with seasonings (e.g., salt, butter and pepper in Australia) or in a dish with other vegetables and flavorings. It can also be boiled, stuffed, mashed, baked, fried, or pickled in escabeche sauce. Both fruit and seed are rich in amino acids and vitamin C. Fresh green fruit are firm and without brown spots or signs of sprouting; smaller fruit are usually more tender. Chayote can be sliced lengthwise and eaten using salad dressing dip. The seed is edible and tasty to some when served cold when dipped in dressing.

The tuberous part of the root is starchy and eaten like a yam (can be fried). It can be used as pig or cattle fodder.

The leaves and fruit have diuretic, cardiovascular and anti-inflammatory properties, and a tea made from the leaves has been used in the treatment of arteriosclerosis and hypertension, and to dissolve kidney stones.

In Louisiana Creole and Cajun cuisine, the fruit is a popular seasonal dish for the holidays, especially around Thanksgiving, in a variety of recipes.

Chayote is an important part of traditional diets across Mesoamerica, and can be found in a variety of dishes.

In Brazil (locally called chuchu) and other Latin American countries, it is breaded and fried, or used cooked in salads, soups, stews and soufflés. 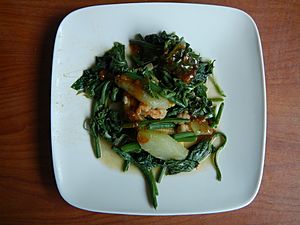 Side dish with chayote tops (Philippines)

In Korea, chayote is known as "차요테" and is commonly used as a side dish in either pickled or marinated form. This fruit is most commonly pickled with vinegar and soy sauce (Korean: 차요테장아찌; "chayote-"jangajji), or marinated and dressed with sauces and spices into a salad (Korean: 차요테무침; "chayote-muchim").

In the Philippines, the plant is known as sayote and is grown mostly in mountainous part of the country such as Benguet and parts of Cordillera Administrative Region. Chayote is used in many kinds of dishes such as soup (often as a substitute for upo squash), stir-fried vegetables and chop suey. It was among the numerous vegetables, grains, and fruits introduced into the country via the Manila galleon trade.

In Indonesia, chayotes are called labu siam and widely planted for their shoots and fruit. It's generally used in Sundanese food as lalap and one of ingredients for Sundanese cuisine called sayur asem.

In Timor-Leste, chayote is called Lakeru Japones and no one has explained why it is called that way. It is speculated that chayote was introduced by Japanese soldiers during world war II.

In Burma/Myanmar, the chayote is known as "Gurkha Thee or Gurkha fruit" (ဂေါ်ရခါးသီး) and is cheap and popular.

In China, the chayote is known as the "Buddha's palm" (Chinese: 佛手瓜; pinyin: fóshǒuguā) or alternatively in Cantonese choko (cau1 kau4) 秋球 [lit. autumn ball][citation needed] or 合掌瓜, and is generally stir-fried.

In Taiwan and southern mainland China, chayotes are widely planted for their shoots, known as lóngxūcài (simplified Chinese: 龙须菜; traditional Chinese: 龍鬚菜; literally "dragon-whisker vegetable"). Along with the young leaves, the shoot is a commonly consumed vegetable in the region.

In Thai cuisine, the plant is known as sayongte (Thai: ซายองเต้) or fak maeo (Thai: ฟักแม้ว, literally meaning "Miao melon"). It grows mainly in the mountains of northern Thailand. The young shoots and greens are often eaten stir-fried or in certain soups.

In eastern and north eastern India and Nepal, the plant and fruit is called squash or ishkus (इस्कुस in Nepali), probably derived from the English word squash. Its shoots, fruit and roots are widely used for different varieties of curries.

In the Indian state of West Bengal, it is generally known as Squash (স্কোয়াশ). The whole vegetable is used to make curries, or it is sauteed. It is also cooked with fish, eggs or mutton. It is largely eaten during the summer and rainy season as it contains much water and is a good source of vitamin C. The young branches are also considered for making items as saag or can be added into preparing the Shukto. There are two varieties available; dark green and light green. The dark green variety is much more tender than the lighter one, which develops a fibrous texture around its seed if harvesting or consumption is delayed.

In Tamil Nadu, South India, chayote is known as Maerakkai (மேரக்காய்)/chow-chow (சௌ சௌ) in Tamil and widely used in everyday cooking for recipes like sambar, kootu, poriyal, thuvayal, chutney and mor-kulambu. Chow-Chow is the common name used in the markets.

In Karnataka, South India, Chayote is popularly referred to as seeme badanekaayi (ಸೀಮೆ ಬದನೇಕಾಯಿ) in Kannada or "Bangalore brinjal"; "brinjal/eggplant/aubergine of the plateau". It is used in vegetable stews like sambar and palya.

In Réunion, the French overseas territory in the Indian Ocean near Mauritius, chou chou, as it is known, is served in many dishes especially in the highlands. A popular starter of Chou chou au Gratin (baked with a cheese sauce), as a side with a meal and even as a dessert.

In Mauritius, it is called sousou and is cultivated in the high plateau of the island. Mixed with beef, pork or chicken chou chou is widely used to make delicious steamed Chinese dumplings called niouk yen (boulette chou chou) or chow mai. Stems and leaves are consumes in bouillon to accompany rice and other dishes. The chou chou is also consumed as pickle, salad, gratin, curry and sauté with beef, egg or chicken.

In Australia, a persistent urban legend is that McDonald's apple pies were made of chokos (chayotes), not apples. This eventually led McDonald's to emphasise the fact that real apples are used in their pies. This legend was based on an earlier belief that tinned pears were often disguised chayotes. A possible explanation for the rumor is that there are a number of recipes in Australia that advise chayotes can be used in part replacement of canned apples to make the fruit go farther in making apple pies. This likely arose because of the economies of "mock" food substitutes during the Depression Era, shortages of canned fruit in the years following World War II, and the fact that apples do not grow in many tropical and subtropical parts of Australia, making them scarce. Chayotes, on the other hand, grow extensively in Australia, with many suburban backyards featuring chayote vines growing along their fence lines and outhouses.

Due to its purported cell-regenerative properties, it is believed as a contemporary legend that this fruit caused the mummification of people from the Colombian town of San Bernardo who extensively consumed it. The very well preserved skin and flesh can be seen in the mummies today.

All content from Kiddle encyclopedia articles (including the article images and facts) can be freely used under Attribution-ShareAlike license, unless stated otherwise. Cite this article:
Chayote Facts for Kids. Kiddle Encyclopedia.