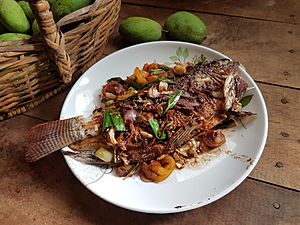 Escabeche of tilapia, from the Philippines

Escabeche is the name for a number of dishes in Spanish, Portuguese, Filipino and Latin American cuisines, consisting of marinated fish or meat, cooked in an acidic sauce (usually with vinegar), and colored with pimentón (Spanish paprika), citrus, and other spices.

In both Spain and Latin America, many variations exist, including frying the main ingredient before marinating it. Escabeche of seafood, fish, chicken, rabbit, or pork are common in Spain and Portugal.

The Spanish and Portuguese word escabeche originates from Andalusi Arabic (spoken in Muslim Iberia) and ultimately Persian. It is derived from al-sikbaj (السكباج), the name of a popular meat dish cooked in a sweet-and-sour sauce, usually containing vinegar and honey or date molasses. This technique spread throughout the former Spanish Empire and is particularly common in Latin America and the Philippines.

The dish is known as escoveitch or escoveech fish in Jamaica and is marinated in a sauce of vinegar, onions, carrots, and scotch bonnet peppers overnight. It is known as escabecio, scapece or savoro in Italy, savoro in Greece (especially Ionian islands), and scabetche in North Africa.

The dish is common in Spain and has evolved with local modifications in the Spanish-speaking world. It is well represented in Portugal, usually spiced with peppercorns, chilies, peppers, onions, garlic and sliced carrots. The dish is popular in the Philippines and Guam, both former Spanish colonies, where it is the closest to the original Spanish version: using fish that is locally available but respecting the original technique.

In international versions, escabeche is usually poached or fried, then served cold after marinating in a refrigerator overnight or longer. The acid in the marinade is usually vinegar but can include citrus juice (a common conservation technique, a pH of 4 or lower effectively stops rotting). Escabeche is a popular presentation of canned or potted preserved fish, such as mackerel, tuna, bonito, or sardines.

All content from Kiddle encyclopedia articles (including the article images and facts) can be freely used under Attribution-ShareAlike license, unless stated otherwise. Cite this article:
Escabeche Facts for Kids. Kiddle Encyclopedia.