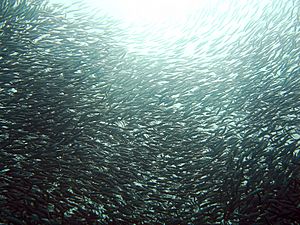 Sardines are small epipelagic fish that sometimes migrate along the coast in large schools. They are an important forage fish for larger forms of marine life. 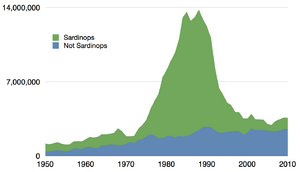 Sardine is a name of several kinds of fish, especially oily fish. Another name for these fish is Pilchard. All of those fish are quite small and are related to the herring. The Latin name of the family of these fish is Clupeidae. However, the naming is not precise. Fishbase, a database about all kinds of fish, has six species just named pilchard. There are over a dozen with the name of sardine. Many more exist, with the basic names qualified by adjectives.

The fish are named after the Island of Sardinia. In the past, they could easily be fished there.

Many shops and supermarkets sell canned (or tinned) sardines. Very often, those fish are not sardines, but rather sprats or round herrings.

Sardines feed almost exclusively on zooplankton, "animal plankton", and congregate wherever this is abundant. 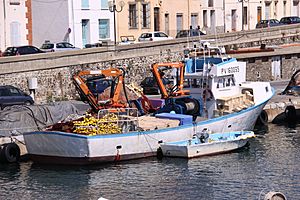 Typically, sardines are caught with encircling nets, particularly purse seines. Many modifications of encircling nets are used, including traps or fishing weirs. The latter are stationary enclosures composed of stakes into which schools of sardines are diverted as they swim along the coast. The fish are caught mainly at night, when they approach the surface to feed on plankton. After harvesting, the fish are submerged in brine while they are transported to shore.

Sardines are commercially fished for a variety of uses: for bait; for immediate consumption; for drying, salting, or smoking; and for reduction into fish meal or oil. The chief use of sardines is for human consumption, but fish meal is used as animal feed, while sardine oil has many uses, including the manufacture of paint, varnish, and linoleum. 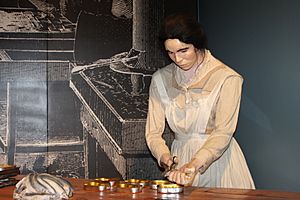 Exhibit of a woman canning sardines at the Maine State Museum in Augusta; sardines are a component of the economy of Maine.

Sardines are commonly consumed by human beings. Fresh sardines are often grilled, pickled, or smoked, or preserved in cans.

Sardines are rich in vitamins and minerals. A small serving of sardines once a day can provide 13% of vitamin B2; roughly one-quarter of niacin; and about 150% of the recommended daily value of vitamin B12. All B vitamins help to support proper nervous system function and are used for energy metabolism, or converting food into energy. Also, sardines are high in the major minerals such as phosphorus, calcium, and potassium, and some trace minerals including iron and selenium.

Because they are low in the food chain, sardines are very low in contaminants, such as mercury, relative to other fish commonly eaten by humans. 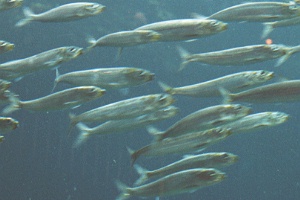 A school of sardines in the ocean

History of sardine fishing in the UK

Pilchard fishing and processing became a thriving industry in Cornwall (UK) from around 1750 to around 1880, after which it went into decline. Catches varied from year to year, and in 1871, the catch was 47,000 hogsheads, while in 1877, only 9,477 hogsheads. A hogshead contained 2,300 to 4,000 pilchards, and when filled with pressed pilchards, weighed 476 lbs. The pilchards were mostly exported to Roman Catholic countries such as Italy and Spain, where they are known as fermades. The chief market for the oil was Bristol, where it was used on machinery.

Since 1997, sardines from Cornwall have been sold as "Cornish sardines", and since March 2010, under EU law, Cornish sardines have Protected Geographical Status. The industry has featured in numerous works of art, particularly by Stanhope Forbes and other Newlyn School artists.

The traditional "Toast to Pilchards" refers to the lucrative export of the fish to Catholic Europe:

Here's health to the Pope, may he live to repent
And add just six months to the term of his Lent
And tell all his vassals from Rome to the Poles,
There's nothing like pilchards for saving their souls!

History of sardine fishing in the United States

In the United States, the sardine canning industry peaked in the 1950s. Since then, the industry has been on the decline. The canneries in Monterey Bay, in what was known as Cannery Row (where John Steinbeck's novel of the same name was set), failed in the mid-1950s. The last large sardine cannery in the United States, the Stinson Seafood plant in Prospect Harbor, Maine, closed its doors on 15 April 2010 after 135 years in operation.

In April 2015 the Pacific Fishery Management Council voted to direct NOAA Fisheries Service to halt the current commercial season in Oregon, Washington and California, because of a dramatic collapse in Pacific sardine stocks. The ban affected about 100 fishing boats with sardine permits, although far fewer were actively fishing at the time. The season normally would end June 30. The ban was expected to last for more than a year, and was still in place in May 2019.

The manner in which sardines can be packed in a can has led to the popular English language saying "packed like sardines", which is used to metaphorically describe situations where people or objects are crowded closely together. The British-Irish poet and comic Spike Milligan satirises this in his poem "Sardine Submarine", where a sardine's mother describes the unfamiliar sight of a submarine to its offspring as "a tin full of people".

Sardines is also the name of a children's game, where one person hides and each successive person who finds the hidden one packs into the same space until only one is left out, who becomes the next one to hide.

Among the residents of the Mediterranean city of Marseille, the local tendency to exaggerate is linked to a folk tale about a sardine that supposedly blocked the city's port in the 18th century. It was actually blocked by a ship called the "Sartine."

All content from Kiddle encyclopedia articles (including the article images and facts) can be freely used under Attribution-ShareAlike license, unless stated otherwise. Cite this article:
Sardine Facts for Kids. Kiddle Encyclopedia.