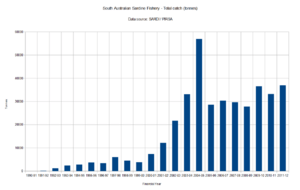 The South Australian sardine fishery targets Sardinops sagax and is the highest yielding single species fishery in Australia by volume. The fishery employs the technique of purse seining. Schools of sardines are encircled by a net up to 1 kilometre in length which is then drawn closed at the bottom. The catch is then pumped on board the fishing vessel where it is stored in refrigerated holds at below freezing temperatures. 94% of the catch is used as feed in Southern bluefin tuna ranching operations off Port Lincoln, South Australia. The remaining 6% of the catch serves human consumption, recreational fishing bait and premium pet food markets.

A key area of concern for industry compliance in 2004 was quota evasion. Quota evasion had previously occurred in several forms: unloading catch directly to tuna farms, failing to report prior to unloading catch and dumping excess catch at sea.

All content from Kiddle encyclopedia articles (including the article images and facts) can be freely used under Attribution-ShareAlike license, unless stated otherwise. Cite this article:
Sardinops Facts for Kids. Kiddle Encyclopedia.