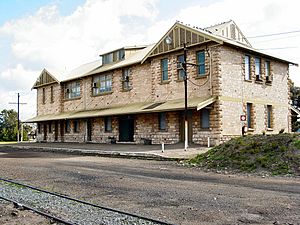 Port Lincoln is a city on the lower Eyre Peninsula in the Australian state of South Australia. It is situated on the shore of Boston Bay, which opens eastward into Spencer Gulf. It is the largest city in the West Coast region, and is located approximately 280 km as the crow flies from the State's capital city of Adelaide (646 km by road). The city is reputed to have the most millionaires per capita in Australia. The town claims to be the "Seafood Capital of Australia".

The Eyre Peninsula has been home to Aboriginal people for over 40 thousand years, with the Nauo (south western Eyre), Barngarla (eastern Eyre), Wirangu (north western Eyre) and Mirning (far western Eyre) being the predominant original cultural groups present at the time of the arrival of Europeans. (Tindale 1974 in DEH 2004a; SATC 1999).

Matthew Flinders was the first European to discover Port Lincoln under his commission by the British Admiralty to chart Australia's unexplored coastline. On 25 February 1802, Flinders sailed his exploration vessel HMS Investigator into the harbour, which he later named Port Lincoln after his native county of Lincolnshire in England. A couple of months later on 19 April, Nicolas Baudin entered the same port and named it Port Champagny.

Sealers had visited the area around 1828 and the mainly French whailing ships were fishing the local bays and island regions by the 1820s and up to the 1840s. In 1836 Governor Sir John Hindmarsh, the first Governor of South Australia, gave instructions to Colonel William Light of finding a capital for the 'New British Provence of South Australia'. He'd been in the colony for four months and in all that time he'd been trying to find a right place for a harbour, and a right place for a settlement.

With boatfuls of immigrants set to arrive and impatient settlers already camping at Holdfast Bay, Rapid Bay and Kangaroo Island, Light was under immense pressure to identify a location with a suitable harbour, sufficient agricultural land and fresh water.

After assessing a number of other potential locations, Light was ordered by England to consider Port Lincoln as a possible site for the capital. While Thomas Lipson had arrived in Port Lincoln earlier and approved of its 'beautiful harbour' and 'fertile land', Light was unconvinced from the beginning as he faced fierce westerly gales, ill-placed islands and rocky reefs on arrival.

Light decided it might be dangerous for merchant ships trying to enter the unfamiliar territory after a long voyage and that there was not enough of what he thought was good agricultural land, and not enough fresh water to sustain a city so he decided to choose Adelaide as the most suitable place for settlement.

Port Lincoln however, proved popular with pioneers and developers, with the first settlers arriving on 19 March 1839 aboard the ships Abeona, Porter and Dorset. On 3 October 1839 Governor George Gawler proclaimed the whole area from Cape Catastrophe to the head of the Spencer Gulf as one district, which he named the District of Port Lincoln.

Local Government formally began on the Eyre Peninsula on 1 July 1880 with the establishment of the District Council of Lincoln. The township of Port Lincoln naturally was included in that area. On 18 August 1921 the Municipality of Port Lincoln was formally proclaimed.

In 1840 one year after settlement, the population of Port Lincoln was 270. There were 30 stone houses, a hotel, blacksmith's shop and a store in the Happy Valley area. Around this time, Edward John Eyre explored the peninsula that was subsequently named in his honour. By 1936 the population had grown to 3200 and the town had a first class water supply. The port had become the commercial pivot for the area, providing for its many agricultural and commercial requirements.

City status was granted to Port Lincoln on 21 January 1971 and the proclamation was read at the opening of the tenth annual Tunarama Festival on the Australia Day weekend.

The lack of a reliable surface water supply was a factor preventing Port Lincoln from being proclaimed the colony's capital city in the 1830s.

The southern and western parts of the Eyre Peninsula region also share this resource via the Tod-Ceduna pipeline. The Iron Knob to Kimba pipeline completed in 2007 provides limited transfer capacity of River Murray water into the Tod-Ceduna system. Following the development of a long term water supply plan for Eyre Peninsula, the South Australian government is progressing detailed investigation of augmentation options. These including seawater desalination.

Formerly a potable water resource fed by the Tod River, the Tod Reservoir was taken offline in 2001–2002 due to concerns about rising levels of agricultural chemical contamination and salinity.

Port Lincoln has a number of places listed on the South Australian Heritage Register, including:

At June 2015 Port Lincoln had an estimated urban population of 16,147. Aboriginal people make up 5.6% of Port Lincoln's population.

Port Lincoln has a contrasting coastal landscape, ranging from sheltered waters and beaches, to surf beaches and rugged oceanic coastline. The Great South Australian Coastal Upwelling System brings cold, nutrient-rich water into nearby waters of the Great Australian Bight and Spencer Gulf. These upwellings support lucrative fisheries, including that of the southern bluefin tuna and sardine.

Port Lincoln has a semi-arid climate, with hot, dry summers and mild, moist winters. January temperatures average 16 °C (60.8 °F) to 26 °C (78.8 °F), while in July temperatures range from 7 °C (44.6 °F) to 16 °C (60.8 °F). Winter days are cool and cloudy, with frequent light drizzle and showers. Cold fronts cause periods of heavy rain and colder temperatures in winter, and violent storms can occasionally roll in from the southern ocean. Summers are mild to warm with cool sea breezes keeping the temperatures generally below 30 °C (86.0 °F). However, on rare occasions a severe blast of heat from the deserts to the north can cause several days of temperatures well over 40 °C (104.0 °F). Rainfall in summer is limited to very infrequent showers or thunderstorms and sometimes during summer, no rain occurs at all. Snow has never been recorded and frost is a very rare occurrence, usually happening only on clear winters nights away from the coast. Extremes have ranged from 46.1 °C (115.0 °F) to −0.3 °C (31.5 °F), while the wettest month on record was June 1981, recording 200.4 millimetres (7.9 in).

Port Lincoln is the terminal station for the Eyre Peninsula Railway, a narrow gauge (1,067 mm (3 ft 6 in)) railway which consists of three lines – Port Lincoln to Kevin, Cummins to Buckleboo and Yeelanna to Kapinnie.

Port Lincoln was also the port terminus for the privately owned standard-gauge Coffin Bay tramway that operated from 1966 to 1989 to carry lime sand to the port at Proper Bay on the south side of the town for BHP. It was used as flux in blast furnaces.

Port Lincoln Airport is located a few kilometres north of the city. Regional Express and Qantaslink provide multiple daily flights to the state capital of Adelaide.

The Port Lincoln Bus Service operates Monday to Friday from 9.00 am to 4.30 pm with separate morning and afternoon services. The morning service runs to a fixed route timetable and services Lincoln North and Lincoln South.

The book Blue Fin by Colin Thiele was set in Port Lincoln, with the movie of the same name filmed in nearby Streaky Bay.

Some of the shark scenes of Jaws and ANZAC Cove scenes in Gallipoli were also filmed near Port Lincoln.

The first edition of Australian Survivor, the Australian version of the popular US television series, Survivor, was filmed at Whalers Way, south of Port Lincoln, in 2001.

The Discovery Channel documentary series Tuna Wranglers (2007) and Abalone Wars were both filmed in and around Port Lincoln.

Port Lincoln was visited in 1939 by English travel author Eric Newby, while he was crew in the 4-masted barque Moshulu, which anchored outside of Boston Island. Moshulu had taken 82 days to sail to Port Lincoln from Belfast in ballast (a fast passage for a windjammer), but there was no grain to be had there, even though Moshulu waited at anchor for most of January. The crew was given shore leave in Port Lincoln, encountering large amounts of Australian wine. Moshulu eventually carried on to Port Victoria for cargo. During the 1939 season, Passat and Lawhill were also present at Port Lincoln. Newby wrote about his experiences on the round-trip from Ireland to South Australia in his book The Last Grain Race (1956), and several pictures of Port Lincoln as it appeared in 1939 are included in his photo-essay of his voyage, Learning the Ropes.

On the TV show Neighbours, the Brennan brothers, Tyler, Mark and Aaron, are originally from Port Lincoln.

Port Lincoln is twinned with:

All content from Kiddle encyclopedia articles (including the article images and facts) can be freely used under Attribution-ShareAlike license, unless stated otherwise. Cite this article:
Port Lincoln Facts for Kids. Kiddle Encyclopedia.