Streaky Bay (formerly Flinders) is a coastal town on the western side of the Eyre Peninsula, in South Australia just off the Flinders Highway, 303 km (188 mi) north-west of Port Lincoln and 727 km (452 mi) by road from Adelaide. At the 2016 census, Streaky Bay recorded a population of 1, 378.

The town of Streaky Bay is the major population centre of the District Council of Streaky Bay, and the centre of an agricultural district farming cereal crops and sheep, as well as having established fishing and tourism industries.

The first European to sight the area was Dutch explorer Pieter Nuyts, in 1627 in the Golden Zeepaard. A monument has been erected on the median strip in Bay Road.

In 1802 Matthew Flinders named Streaky Bay whilst on his voyage in the Investigator. In his log of 5 February 1802, he describes:

"And the water was much discoloured in Streaks... and I called it Streaky Bay"

It is now thought these streaks are caused by the release of oils by certain species of seaweed in the bay.

The first European land exploration was conducted on behalf of the Secondary Towns Association by John Hill and Samuel Stephens, whose expedition arrived at Streaky Bay on 15 August 1839 using the chartered brig Rapid as a base.

A fortnight later, on 25 August 1839, Edward John Eyre, who had explored overland from Port Lincoln, arrived at this locality and established a small base about 3 kilometres from what is now the Streaky Bay Township which he used as a store for his overland expeditions to Point Bell. This site, known as Eyre's Waterhole, is listed on the South Australian Heritage Register, and can still be seen today just off the Flinders Highway.

Pastoralists moved into the area from 1854. The town was officially proclaimed in 1872, originally called Flinders, but was changed in 1940 to Streaky Bay to reflect local usage of the name.

Wheat growing began in the 1880s and by 1906, 31,000 bags of wheat and 470 bales of wool had been exported from Streaky Bay by ship. By this time a telegraph office had been established and regular mail deliveries were made from Port Lincoln.

In September 1918, a massive Blue Whale over 26 metres long, was cast onto rocks on Gibson's Peninsula. Its skeleton is still on display in the South Australian Museum.

Streaky Bay and the surrounding district show a great variety of landscapes, from largely untouched native scrubland and farming country to cliffs and extensive surf beaches. The inland areas of the district are largely dominated by pastoral country; however areas such as the Calpatanna Waterhole Conservation Park located 30 km SE of Streaky Bay represents an example of the original coastal and salt lake environments, where wildlife still abounds. Possibly the areas most interesting geological features are Murphy’s Haystacks. These pink granite formations have been dated at 1590 million years old.

The features that most commonly draw tourists are along the immense stretch of coastline surrounding the bay. The Bay itself is relatively protected and quiet stretches of beach can be found along most of its length. However, where the coastline is exposed to the swells of the Southern Ocean, cliffs are exposed, along with sheltered areas that harbour large rockpools, such as Smooth Pool and The Granites. The islands of the Nuyts Archipelago lie to the north-west.

Streaky Bay has a mild climate with the average a few degrees above Adelaide in summer and winter with an average rainfall of 378 mm per year.

The township of Streaky Bay is situated on the southern end of the bay, on an enclosed inlet named Blanche Port (after Lady Blanche MacDonnell, the wife of Governor George MacDonnell) or Augusta Harbor. 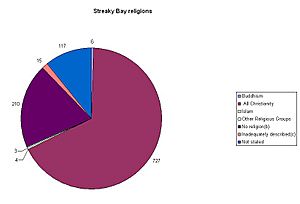 There are several churches in the area as well as a variety of active sports clubs, including football, cricket, bowls, netball, golf and a swimming pool. The district has strong health and education services in the form of the Streaky Bay Hospital, the local Area School and public library.

Transport to and from Streaky Bay is usually done by car via the Flinders Highway, but bus services to and from Adelaide do operate, as does the Streaky Bay Airport. The Streaky Bay Airport is situated approximately 10 kilometres to the east of the town (Streaky Bay to Port Lincoln Highway). The facilities are open 24 hours a day with pilot activated, fully automated lighting facilities available. From 17 April 2009 Banksia Adventures will start a charter service to Adelaide with a plane from Renaissance Air every Friday and Sunday plus one morning and evening return flights on the third Wednesday of each month Residents and visitors are able to also access flights from either Ceduna Airport or Port Lincoln Airport.

Agriculture and fishing have long been the primary industries of the Streaky Bay region, with modern aquaculture now playing a large part in the local economy. The local economy is strongly dominated by agriculture, with an emphasis on wheat, barley and other cereals as well as sheep. Due to the relatively arid conditions, dryland farming techniques are successfully applied. Recent diversification has seen the successful testing of Damara sheep, Boer goats and olives which all offer potential future investments.

Commercial fishing has played a major role in the economy of the area since the early 1900s, with Snapper and King George Whiting being the main targets of fishermen. More recently, aquaculture of oysters and abalone has also expanded and thrived in the waters of Streaky Bay.

Tourism is an ever-growing component of the local economy, with town numbers swelling during the summer holidays and at Easter. Tourists are attracted by the many natural attractions of the area as well as a host of recreational activities. The most popular of these is undoubtedly recreational fishing, with hundreds of anglers flocking to the area to sample the renowned whiting on offer. Beach, rock and boat fishing are available, with a recently built boat ramp to cater for the boaters wishing to explore the area. King George whiting, Snapper and Blue Swimmer Crabs are the most commonly targeted species, with many more available. Other activities include hiking, surfing, snorkelling and scuba diving, with guided charters being available.

All content from Kiddle encyclopedia articles (including the article images and facts) can be freely used under Attribution-ShareAlike license, unless stated otherwise. Cite this article:
Streaky Bay, South Australia Facts for Kids. Kiddle Encyclopedia.