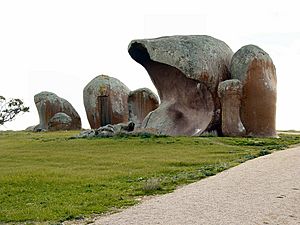 Murphy's Haystacks are inselberg rock formations located at Mortana, between Streaky Bay and Port Kenny on the Eyre Peninsula in South Australia. They obtained their name because a traveller in a coach saw the formation in the distance. He asked how a farmer could produce so much hay. As the farm was on a property owned by a man called Murphy, the rocks became known as Murphy's Haystacks.

The site is listed on the South Australian Heritage Register. 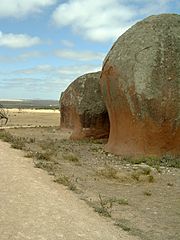 The reverse side of the Haystacks

All content from Kiddle encyclopedia articles (including the article images and facts) can be freely used under Attribution-ShareAlike license, unless stated otherwise. Cite this article:
Murphy's Haystacks Facts for Kids. Kiddle Encyclopedia.