Kids Encyclopedia Facts
This page is about the peninsula in South Australia . For other uses, see Eyre. 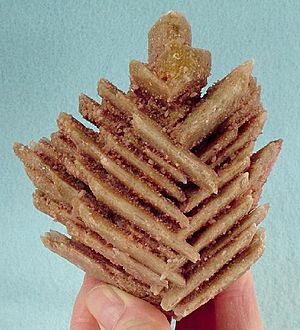 Eyre Peninsula is a triangular peninsula in South Australia. It is bounded on the east by Spencer Gulf, the west by the Great Australian Bight, and the north by the Gawler Ranges. It is named after explorer Edward John Eyre who explored parts of the region in 1839-1841. The coastline was first charted by the expeditions of Matthew Flinders in 1801-1802 and French explorer Nicolas Baudin around the same time. The region's economy is primarily agricultural, with growing aquaculture, mining and tourism sectors. The main townships are Port Lincoln in the south, Whyalla and Port Augusta at the north east, and Ceduna at the northwest.

Eyre Peninsula was named after Edward John Eyre, the explorer, on 7 November 1839 by George Gawler, the second Governor of South Australia. The peninsula’s extent has been described as follows. Firstly, its coastline boundary was defined in 1839 as “boundary is Spencer's Gulf in its whole length, to the southern ocean from Cape Catastrophe to the western point of Denial Bay.” Secondly, its northern boundary was described in 1978 as follows - “no official boundary ever proclaimed but the common sense choice would be to draw a straight line from Yorkey Crossing to the northern most point of Denial Bay.’’ 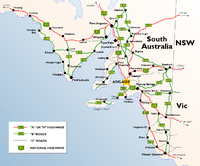 The peninsula is served by the isolated narrow-gauge Eyre Peninsula Railway which serves the ports at Port Lincoln and Thevenard (near Ceduna). This line is separated from the main system by desert country, and there has therefore never been any need for a connecting link.

There are also railways from the iron ore mines in the Middleback Ranges to the smelter and port at Whyalla. These are also connected to the national rail network by the Whyalla railway line to Port Augusta.

To facilitate prospective mines, new freight corridors and ports have been proposed to export minerals via Spencer Gulf. New port proposals are in place at Port Bonython, Lucky Bay, Cape Hardy and Sheep Hill (Lipson Cove). A proposal to export iron ore from Port Lincoln by Centrex Metals Ltd was approved but abandoned after strong public opposition. Port Bonython Fuels, a future fuel distribution hub has been approved to be constructed at Port Bonython to aid the development of the mining industry. Once constructed and operational, fuel will be delivered to towns and mine sites by road tankers up to A-triple class.

Potable water is scarce on Eyre Peninsula. Presently, water is pumped several hundred kilometres from the River Murray to the town of Whyalla through the Morgan-Whyalla pipeline. Underground water resources are suffering from gradually increasing salinity. The only reliable surface flows are from the Tod River and its main tributary, Pillaworta Creek which are captured by the Tod Reservoir. The reservoir was built to augmented the groundwater supply of Port Lincoln and was constructed in the early 1920s. It was taken offline in the early 2000s due to concerns over rising salinity and contamination from agricultural chemicals. SA Water has investigated potential locations for seawater desalination plants to address future water security problems. As of January 2014, no plants are proposed to be built for domestic or agricultural supply, though one currently exists and two have been proposed to serve the mining industry exclusively. The existing plant is located at Whyalla and is operated by Arrium and plants are proposed for Point Lowly and Lipson Cove to serve BHP Billiton and Centrex Metals respectively.

Eyre Peninsula includes the following local government areas - Ceduna, Cleve, Elliston, Franklin Harbour, Kimba, Lower Eyre Peninsula, Port Lincoln, Streaky Bay, Tumby Bay, Wudinna and Whyalla as well as the western portion of the City of Port Augusta. The area at the northern end of the peninsula is within the unincorporated area of South Australia where municipal services are provided by the Outback Communities Authority to communities including Iron Knob.

Eyre Peninsula is within the boundaries of the federal division of Grey and the state electoral districts of Flinders and Giles.

Eyre Peninsula is within the extent of the following two South Australian government regions - “Eyre and Western” and the Far North. 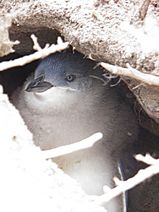 In 2016, the following protected areas were located within the extent of Eyre Peninsula:

All content from Kiddle encyclopedia articles (including the article images and facts) can be freely used under Attribution-ShareAlike license, unless stated otherwise. Cite this article:
Eyre Peninsula Facts for Kids. Kiddle Encyclopedia.