Lincoln National Park is a protected area in the Australian state of South Australia located about 249 kilometres (155 mi) west of the state capital of Adelaide and about 9.5 kilometres (5.9 mi) south of the municipal seat of Port Lincoln. It consists of a mainland area on the Jussieu Peninsula on the south eastern tip of Eyre Peninsula and a number of nearby islands. The national park contains significant sites of natural, indigenous and early European heritage. 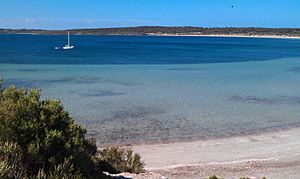 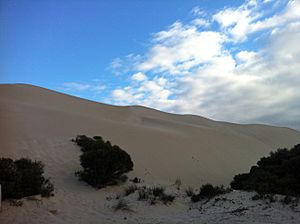 Lincoln National Park includes the following islands which are located in the waters adjoining the Jussieu Peninsula:

In the years 1972–1992, the national park increased in size by the addition of land at Stamford Hill, Cape Donington, Wanna and many of the islands adjoining the coast of the Jussieu Peninsula. The Lincoln Conservation Reserve which was proclaimed in 1993 under the Crown Lands Act 1929, was added to the national park's management regime and subsequently removed after the declaration of the reserve as the Lincoln Conservation Park. In June 1999, the boundary of the national park was extended down to Mean Low Water Mark.

The Aboriginal tribes of Barngala and Nauo were the first people to have lived in the region. Archaeological digs have found sites of stone working, including fish traps, and middens throughout the national park.

The coastline of Jussieu Peninsula and the adjoining islands was first visited by European explorers in 1802 when the British navigator, Matthew Flinders visited in 1802 followed by the Baudin expedition to Australia later in that year. A stone obelisk monument known as the Flinders Monument was dedicated at Stamford Hill in 1844 by Sir John Franklin in tribute to Flinders' achievements and is listed as a state heritage place on the South Australian Heritage Register.

Subsequent to the survey by Flinders, the land was settled by a small number of Europeans, mainly along Cape Donington (named after the birthplace of Flinders), where the first grain crop was sown in 1875. Other industries that occurred in the early parts of European settlement were woodcutting, grazing and guano mining. Donington cottage, which still stands and is accessible to the public, is a relic of that era. The Cape Donington Lighthouse was built in 1905. A hexagonal concrete tower, it stands 32 m high and is still in operation. On 5 April 1907 the ketch Mary Ellis, on its way from Port Adelaide to Venus Bay, got caught in a gale and was wrecked on a beach along Sleaford Bay, now named Mary Ellis Wreck Beach. Despite total destruction of the ship, no casualties were recorded. 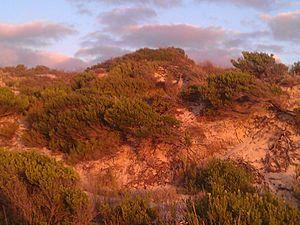 A kangaroo near Wanna

The national park is largely covered by coastal mallee eucalypts around outcrops of granite. The sand dunes on the southern coastline have smaller shrub coverage.

The national park is home to a number of resident as well as migratory bird and animal species. Numerous kangaroos, wallabies and emus reside in the national park. Feral foxes were once common in the national park, endangering the existence of many native animals, however after an extensive baiting and culling program, their numbers have diminished. With the reduction in fox numbers, a rebound in goanna and bush stone curlew populations have been recorded. Brush-tailed bettongs and malleefowl have been reintroduced in the national park and are now becoming common.

Migratory birds such as stints and sandpipers spend summer in the national park as part of their seasonal migrations from places as distant as the Arctic Circle and Siberia. Southern right whales are visible in the water surrounding the national park during their seasonal migrations between July and November and Australian sea lions can be seen on rocks and small islands off the coast. 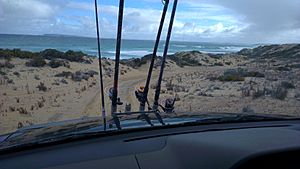 As of 2010, a total of 19 bushwalking trails with a length of over 100 kilometres (62 mi) were available within the national park. The trail system is also part of a regional walking trail known as the Investigator Trail which extends outside of both the national park and the Jussieu Peninsula to North Shields via Tulka and Port Lincoln.

Much of the national park is only accessible via four-wheel drive tracks including the Sleaford to Wanna sand dune track.

All content from Kiddle encyclopedia articles (including the article images and facts) can be freely used under Attribution-ShareAlike license, unless stated otherwise. Cite this article:
Lincoln National Park Facts for Kids. Kiddle Encyclopedia.