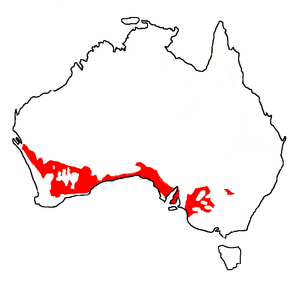 Mallee Woodlands and Shrublands is one of 32 Major Vegetation Groups defined by the Australian Government Department of the Environment and Energy.

"Mallee" is an Aboriginal word for a groups of eucalypts that grow to a height of 2–9 m (6 ft 7 in–29 ft 6 in), have many stems arising from a lignotuber and have a leafy canopy that shades 30–70% of the ground. It is also a name given to a vegetation association where mallee eucalypts grow, and that is generally flat without hills or tall trees.

The major vegetation subgroups of MVG14, based mainly on the perennial components of the understorey are:

360° panorama of Mallee Woodlands and Shrublands in northwest Victoria.

The most extensive area of this vegetation association in Australia today is found in the Great Victoria Desert. Prior to 1750, the largest area is estimated to have occurred in the Murray-Darling basin.

About 33% of the clearing of this vegetation type is estimated to have accounted for 10% of the total area of land clearing in Australia. In South Australia, clearing of the mallee started in about 1900, following the introduction of the stump-jump plough.

All content from Kiddle encyclopedia articles (including the article images and facts) can be freely used under Attribution-ShareAlike license, unless stated otherwise. Cite this article:
Mallee Woodlands and Shrublands Facts for Kids. Kiddle Encyclopedia.