Gawler Ranges National Park is a 1,633 km2 (631 sq mi) protected area lying 350 km (217 mi) north-west of Adelaide in the northern Eyre Peninsula of South Australia. It is known for its spectacular rock formations.

Camping is permissible and encouraged at several campgrounds. Although some have toilets, there are minimal other facilities and visitors are encouraged to take adequate food, water, fuel and firewood with them. 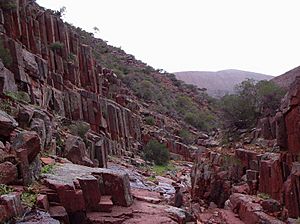 The Organ Pipes in the Gawler Ranges

Some 21 rare and endangered animal and plant species including the yellow-footed rock-wallaby can be found in the national park. Another larger mammal is the southern hairy-nosed wombat. Some 140 species of birds have been recorded in the national park. The area covered by the national park has been identified by BirdLife International as an Important Bird Area (IBA) because it supports populations of the vulnerable malleefowl, the Gawler Ranges subspecies of the short-tailed grasswren, rufous treecreeper, blue-breasted fairy-wren, purple-gaped honeyeater and western yellow robin.

All content from Kiddle encyclopedia articles (including the article images and facts) can be freely used under Attribution-ShareAlike license, unless stated otherwise. Cite this article:
Gawler Ranges National Park Facts for Kids. Kiddle Encyclopedia.