Kimba is a rural service town on the Eyre Highway at the top of Eyre Peninsula in the Australian state of South Australia. At the 2006 census, Kimba had a population of 636 and it has an annual rainfall of 348 mm. There is 7 metre tall statue of a big galah beside the highway marking halfway between the east and west coasts of Australia. The Gawler Ranges are north of the highway near the town.

Kimba is in the District Council of Kimba, the South Australian Legislative Assembly electoral district of Flinders and the Australian House of Representatives Division of Grey.

The word "Kimba" is derived from the local Aboriginal word for "bushfire", and the District Council of Kimba's emblem reflects this in the form of a burning bush.

The first European in the area was explorer Edward John Eyre, who passed through the area on his passage from Streaky Bay to the head of Spencer Gulf in late 1839.

The area was first settled in the 1870s by lease-holding pastoralists who moved north up the Eyre Peninsula during the 1870s and 1880s. They lightly stocked the land and relied on the limited water supplies and intermittent open grass lands to raise their stock. It was more intensively settled for wheat farming from 1908, when overseas demand for wheat increased in the late nineteenth and early twentieth centuries. The large tracts of mallee scrub began to be cleared to facilitate this, and soon regular mail services were established from the port at Cowell. Bags of wheat had to be loaded onto bullock drays which carried the produce to Cowell 76 km south.

In 1913, Kimba was connected by narrow gauge railway to Port Lincoln. This development encouraged a number of new wheat farmers to move into the area. Two years later the township of Kimba was officially proclaimed and service industries began to move into the district.

Kimba is located within a dry (arid and semi arid) climate zone (Koppen classification BSh), where precipitation is less than the total potential evapotranspiration. The region is characterised by hot summers and relies on cool winter rainfall for cereal (dominantly wheat and barley with smaller amounts of oats and canola) agriculture. Grazing is also practised, largely that of merino sheep for wool production with smaller amounts of cattle grazing. Water for stock is sourced solely from rainfall due to the paucity of reliable groundwater in the district, and often summer thunderstorms can supplement the winter rainfall for grazing purposes.

Kimba and the associated Buckleboo agricultural area is one of a small number of communities on Eyre Peninsula located significantly to the north of Goyders Line in South Australia. This line represents a remarkable development in climatic understanding from the 19th century in that it was the first recognition of the vagaries of highly variable rainfall and climatic conditions with respect to European style agriculture. 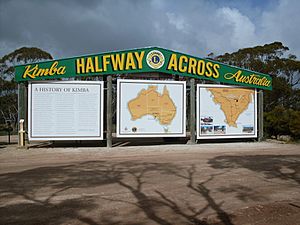 The Kimba district is dominated by calcareous earths, containing distinctive calcrete profiles and varying degrees of development, with minor ferruginous red-brown earths and local pisolitic regions. The major exception is to the south west of the Kimba District, within the Corrobinnie Depression, a palaeochannel which is now filled with deep sands. Much of this region is unsuitable for agriculture and comprises the Pinkawillinie Conservation Park. Locally grey loams and gypsum bearing flats are developed, with minor evaporites surrounding playa lakes, such as Lake Gilles at the eastern end of the district.

Small rounded hills in the form of Wild Dog Hill occur in the Kelly region to the east of Kimba township, with two ranges, Botanella Hills and the Wilcherry Range comprising uplands to the north east. The Gawler Ranges located in the pastoral country to the far north, the Cleve Uplands to the south, and the Corrobinnie Depression comprise distinct geomorphic boundaries to the District Council of Kimba.

All content from Kiddle encyclopedia articles (including the article images and facts) can be freely used under Attribution-ShareAlike license, unless stated otherwise. Cite this article:
Kimba, South Australia Facts for Kids. Kiddle Encyclopedia.