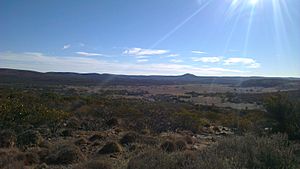 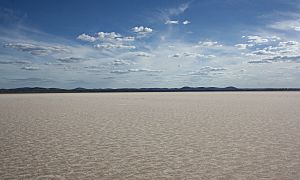 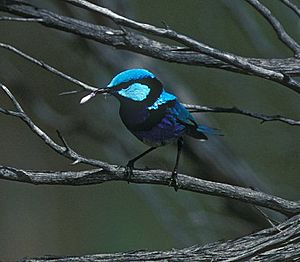 Splendid fairywren in the Gawler Range

The ranges were named by Edward John Eyre after the Governor of South Australia, George Gawler in 1839. This was on one of Eyre's earlier expeditions before his famous crossing of the Nullarbor Plain further west. And it was on this expedition that Edward John Eyre made the first recorded sighting of South Australia's floral emblem, the Sturt desert pea, in 1839 during an early exploration of the region.

Stephen Hack explored the range in 1856 and in 1857 the first pastoral lease was taken up in the area and more sheep stations were soon established. Two good seasons followed in 1857 and 1858 with pastoralists reporting permanent freshwater lakes on their runs. Stations were required to stock 50 sheep per square mile (19 per square kilometre) but soon properties such as Nonning were shearing flocks of 90,000. The first mail service from Port Augusta to Yardea commenced in 1876, with the telegraph service to Western Australia that passes through the range commencing in 1903

The ranges were formed by volcanic activity nearly 1.5 billion years ago: the volcanic activity resulted in a lava field, rather than volcanoes. The highest point is Nukey Bluff at 465 metres (1,526 ft) above sea level. The ranges are a small part of the Gawler Craton which is a craton rich in mineral resources, although many are only recently discovered and not yet fully exploited. Bornhardts dominate the landscape.

There are some 140 species of birds in the Gawler Ranges, including the emu, wedge-tailed eagle, Major Mitchell's cockatoo and singing honeyeater.

The Gawler Ranges are home to several larger mammals, like the southern hairy-nosed wombat and the endangered yellow-footed rock wallaby.

All content from Kiddle encyclopedia articles (including the article images and facts) can be freely used under Attribution-ShareAlike license, unless stated otherwise. Cite this article:
Gawler Ranges Facts for Kids. Kiddle Encyclopedia.