Major Mitchell's cockatoo (Lophochroa leadbeateri), also known as Leadbeater's cockatoo or the pink cockatoo, is a medium-sized cockatoo restricted to arid and semi-arid inland areas of Australia, though it is seen regularly in other climates, for example, South-East Queensland's subtropical region. It is here placed in its own monotypic genus Lophochroa, though to include it in Cacatua as others do is not wrong as long as the corellas are also included there. They are also a type of cockatoo. 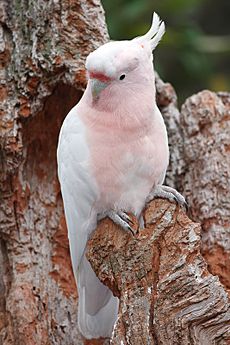 Adult perched on a tree in Melbourne Zoo

With its soft-textured white and salmon-pink plumage and large, bright red and yellow crest, it is often described as the most beautiful of all cockatoos. It is named in honour of Major Sir Thomas Mitchell, who wrote, "Few birds more enliven the monotonous hues of the Australian forest than this beautiful species whose pink-coloured wings and flowing crest might have embellished the air of a more voluptuous region."

Major Mitchell females and males are almost identical. The males are usually bigger. The female has a broader yellow stripe on the crest and develop a red eye when mature.

Major Mitchell's cockatoo may be more closely related to Cacatua than is the galah, and that its lineage diverged around the time of or shortly after the acquisition of the long crest; probably the former as this crest type is not found in all Cacatua cockatoos, so must have been present in an early or incipient stage at the time of the divergence of the Major Mitchell's cockatoo's ancestors. Like the galah, this species has not lost the ability to deposit diluted pigment dyes in its body plumage, although it does not produce melanin coloration anymore, resulting in a lighter bird overall compared to the galah. Indeed, disregarding the crest, Major Mitchell's cockatoo looks almost like a near-leucistic version of that species. Another indication of the early divergence of this species from the "white" cockatoo lineage is the presence of features found otherwise only in corellas, such as its plaintive yodeling cry, as well as others which are unique to Major Mitchell's and the true white cockatoos, for example the large crest and rounded wing shape.

In contrast to those of the galah, populations of Major Mitchell's cockatoos have declined rather than increased as a result of man-made changes to the arid interior of Australia. Where galahs readily occupy cleared and part-cleared land, Major Mitchell's cockatoos require extensive woodlands, particularly favouring conifers (Callitris spp.), sheoak (Allocasuarina spp.) and eucalypts. Unlike other cockatoos, Major Mitchell pairs will not nest close to one another, so they cannot tolerate fragmented, partly cleared habitats, and their range is contracting.

In the Mallee region of Victoria where the galah and Major Mitchell's cockatoo can be found to be nesting in the same area, the two species have interbred and produced hybridised offspring occasionally. 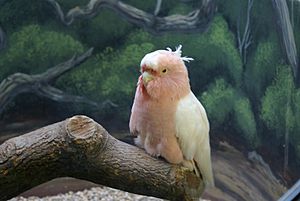 Cookie, a cockatoo that lived to be 83 years old, housed in the Brookfield Zoo

Major Mitchell's cockatoo is not listed as a threatened species on the Environment Protection and Biodiversity Conservation Act 1999.

"Cookie," was a Major Mitchell's cockatoo and was a beloved resident of Illinois' Brookfield Zoo near Chicago from the time the zoo opened in 1934 until his death on 27 August 2016. Cookie was 83 years old and he had been retired from public display since 2009, due to ill health prior to his death. 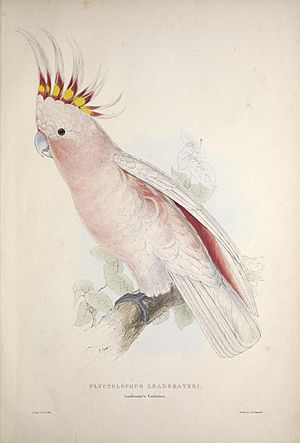 All content from Kiddle encyclopedia articles (including the article images and facts) can be freely used under Attribution-ShareAlike license, unless stated otherwise. Cite this article:
Major Mitchell's cockatoo Facts for Kids. Kiddle Encyclopedia.