Whyalla is the third most populous city in the Australian state of South Australia after Adelaide and Mount Gambier. At June 2015 Whyalla had an estimated urban population of 22,654. It is a seaport located on the east coast of the Eyre Peninsula. The town is known as the "Steel City" due to its integrated steelworks and shipbuilding heritage. The port of Whyalla has been exporting iron ore since 1903.

The city consists of an urban area is bounded to the north by the railway to the mining town of Iron Knob, to the east by Spencer Gulf and to the south by the Lincoln Highway. The urban area consists of the following suburbs laid from east to west extending from a natural hill known as Hummock Hill – Whyalla, Whyalla Playford, Whyalla Norrie, Whyalla Stuart and Whyalla Jenkins. A port facility, a railyard serving the railway line to Iron Knob and an industrial complex are located to the immediate north of Hummock Hill.

It was founded as Hummock's Hill in 1901 by the Broken Hill Proprietary Company (BHP) as the end of a tramway bringing iron ore from Iron Knob in the Middleback Range to sea. Its first shipment was transported across Spencer Gulf to Port Pirie where it was used in lead smelters as a flux. A jetty was built to transfer the ore and the first shipment was sent in 1903. The early settlement consisted of small cottages and tents clustered around the base of the hill. The Post Office opened in 1901 as Hummock's Hill and was renamed Whyalla on 1 November 1919.

The arid environment and lack of natural fresh water resources made it necessary to import water in barges from Port Pirie.

On 16 April 1920 the town was proclaimed as Whyalla. The ore conveyor on the jetty was improved and ore began to be shipped to the newly built Newcastle, New South Wales steelworks. The town grew slowly until 1938.

The BHP Indenture Act was proclaimed in 1937 and provided the impetus for the construction of a blast furnace and harbour. In 1939 the blast furnace and harbour began to be constructed and a commitment for a pipeline from the Murray River was made. A shipyard was built to provide ships for the Royal Australian Navy during World War II. The population began rising dramatically and many new facilities, including a hospital and abbatoirs, were built.

In 1941 the first ship from the new shipyard, HMAS Whyalla, was launched and the blast furnace became operational. By 1943 the population was more than 5,000. On 31 March 1943, the Morgan-Whyalla pipeline became operational. In 1945 the city came under combined company and public administration and the shipyard began producing commercial ships. In 1948 displaced persons began arriving from Europe.

In 1958 the Company decided to build an integrated steelworks at Whyalla and it was completed in 1965. In the following year, salt harvesting began and coke ovens were built. The population grew extremely rapidly, and the South Australian Housing Trust was building 500 houses a year to cope with the demand. Plans for a city of 100,000 were produced by the Department of Lands. A second pipeline from Morgan was built to cope with the demand.

In 1970 the city adopted full local government status. Fierce competition from Japanese ship builders resulted in the closing of the shipyards in 1978, which were at the time the largest in Australia. From a peak population of 33,000 in 1976 the population dropped rapidly. A decline in the BHP iron and steel industry since 1981 also impacted employment.

The BHP long products division was divested in 2000 to form OneSteel which is the sole producer of rail and steel sleepers in Australia. On 2 July 2012, OneSteel formally changed its name to Arrium.

From 2004 northern South Australia enjoyed a mineral exploration boom and Whyalla found itself well placed to benefit from new ventures, being situated on the edge of the Gawler Craton. The city experienced an economic upturn with the population slowly increasing and the unemployment rate falling to a more typical level.

In 1998 Bennett Oval hosted an NRL match between the Adelaide Rams and Illawarra Steelers. The Steelers won 39–4.

Whyalla has a number of heritage-listed sites, including: 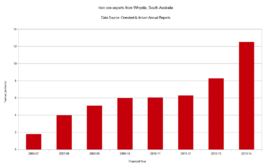 Since its beginnings as Hummock Hill, the town has served as a port for the shipment of iron ore from deposits along the Middleback Range.

In 2007, new transshipment handling processes were implemented, which allowed Arrium (formerly Onesteel) to load iron ore onto larger capesize bulk carrier vessels in deeper water. The transshipment process involves the filling of barges with ore which is then transferred into the receiving vessels at one of three transshipment anchorages.

In October 2015 Arrium loaded its largest capesize cargo via transshipment. The FPMCB Nature was loaded with approximately 205,698 wet metric tonnes (wmt) of iron ore – significantly more than the average load of about 170,000 wmt.

The port's inner harbor receives shipments of coal which is used to produce coke for the Whyalla steelworks and exports smaller cargoes of finished steel products.

Whyalla has a semi-arid climate with hot summers and mild to cool winters, and mild rainfall spread throughout the year.

According to the 2011 Census the population of the Whyalla area was 21,991 (including Mullaquana) people, making it the second largest urban area in the state outside of Adelaide. Approximately 50.5% of the population were male, 74% are Australian born and 4.2% were Indigenous.

The most popular industries for employment were Metal Manufacturing (18%), School Education (5.5%) and Health (4.1%), while the unemployment rate is approx. 8.1%. The median weekly household income is A$932 or more per week, compared with $1,106 in Adelaide. 19.6% of the population identify themselves as Catholic, while a higher 33.5% identify with no religion at all.

The Lincoln Highway passes directly through Whyalla. The city is served by a coach bus service operated by Premier Stateliner which operates four services to and from Adelaide (via Port Augusta) each week day (less on weekends) and one service each way to Port Lincoln. There are however occasional exceptions to the week day route due to lack of demand to travel through Whyalla.

A narrow gauge tramway was built to Iron Knob to supply iron ore originally used as flux when smelting copper ore. This ore became the basis of the steelworks. As the Iron Knob deposits were worked out, the railway was diverted to other sources of ore at Iron Monarch, Iron Prince, Iron Duke and Iron Baron.

To enable interchange between the BHP's other steelworks in Newcastle and Port Kembla of specialised rollingstock, the railway system within the Whyalla steelworks was converted to standard gauge circa 1963.

Although the steelworks produced railway rail, for several decades there was no railway connection to the mainland system. Finally in 1972, the standard gauge Whyalla line to Port Augusta was completed.

Some iron ore is exported from Whyalla. In 2007, steps were being taken to export iron ore mined at Peculiar Knob near Coober Pedy, 600 km away. To meet this increased demand, a balloon loop was installed in 2012 at the port for both gauges.

Whyalla is served by Whyalla Airport, with Regional Express flying into Whyalla from Adelaide a number of times a day. QantasLink also operates double daily services from Adelaide.

There is a small boat marina (populated by a number of dolphins), a sailing club, and a boat ramp on the coastline below Hummock Hill, where there is a fish-cleaning station situated nearby. Iron ore is exported through an off-shore facility.

The industrial and cultural history of Whyalla is accessible to tourists via several museums and public tours.

Visitors can view the ex-HMAS Whyalla from the Lincoln Highway and take a guided tour of it via the Whyalla Maritime Museum. The ship is a retired World War II-era corvette and was the first ship built in the city of Whyalla during the war. It was relocated to the highway in 1987. The Whyalla Maritime Museum features various displays commemorating the town's ship building and mining history, including miniature replicas of various ships and a model railway diorama. Further displays introduce visitors to the region's natural and indigenous cultural histories.

Tours of the Whyalla steelworks allow visitors to view the production of long products at the working plant. Tours departing from the Whyalla Visitors Centre. 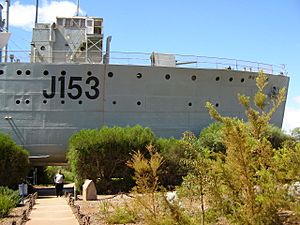 The town's development and social history is presented at the volunteer-run Mount Laura Homestead National Trust Museum, which is located near the Westlands shopping centre. 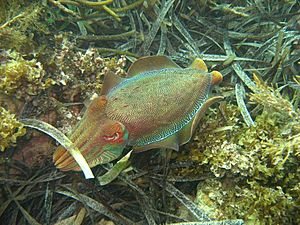 In the late 1990s the annual migration of the Australian Giant Cuttlefish Sepia apama to shallow, inshore rocky reef areas in Spencer Gulf north of Whyalla became recognized by divers and marine scientists. Divers and snorkellers can see the aggregation of animals from May through August each year, in water one to six metres deep. The most popular places to view the aggregation are Black Point, Stony Point and Point Lowly. Car parking and boardwalks or stairs to the waters edge are present at each location, making access easy.

Dolphins frequent the Whyalla marina, but concerns have been raised that their confidence around humans may increase their vulnerability.

The Whyalla Conservation Park provides an example of the natural semi-arid environment accessible via walking trails. A gentle climb to the top of Wild Dog Hill provides a view of the surrounding landscape and information on native vegetation via a series of interpretive signs.

Boat launching facilities exist at Whyalla and Point Lowly North marinas. The Whyalla Marina also has a jetty which is illuminated at night for the convenience of fishers.

Whyalla is home to an annual Snapper Fishing Competition, held over the Easter long weekend. People who have not fished commercially during the prior 12 months are invited to compete. Prizes are awarded bases on individual fish weights. Tagging also takes place at this time. Additional categories exist for other fished species.

The annual Whyalla Recording Scholarship runs annually for Whyalla residents aged from 12 to 19.

All content from Kiddle encyclopedia articles (including the article images and facts) can be freely used under Attribution-ShareAlike license, unless stated otherwise. Cite this article:
Whyalla Facts for Kids. Kiddle Encyclopedia.