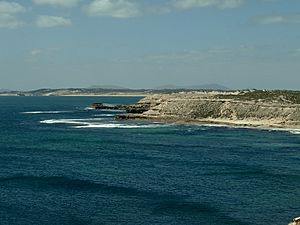 Coffin Bay National Park is a national park in on the Eyre Peninsula of South Australia (Australia), 301 km west of Adelaide, and 46 km west of Port Lincoln. The township of Coffin Bay is near the entrance to the National Park. The national park occupies the Coffin Bay Peninsula - a long peninsula with a sheltered bay to its north, coastal dunes, swamps and a coastline which overlooks islands, reefs, limestone cliffs and white surf beaches.

To the east of Point Avoid are Almonta and Gunyah Beaches, used for surfing. Reefs extend out to sea from Point Avoid to Golden Island with Price Island further out. There is a camping area at Yangie Bay with camping fees payable on entry to the National Park. Access to the majority of the park's area north of Yangie Bay is via four wheel drive tracks only.

There is a great variety of wildlife in the national park, including until February 2004 wild horses, known as the Coffin Bay Ponies. Many seabirds can be seen including white-bellied sea eagles and ospreys as well as various albatrosses and petrels.

For over 20 years the Park has been cared for by the Friends of Coffin Bay Parks who have worked to revegetate native vegetation and eradicate feral animals and pest weeds. The results of these efforts can be clearly seen each year.

The waters adjoining the coastline of the national park are within the Thorny Passage Marine Park.

The area covered by the national park is also overlapped by the Coffin Bay Important Bird Area, a non-statutory classification determined by BirdLife International. This particular IBA supports over 1% of the world populations of pied and sooty oystercatchers, as well as significant numbers of fairy terns, hooded plovers, western whipbirds, rock parrots and blue-breasted fairy-wrens.

All content from Kiddle encyclopedia articles (including the article images and facts) can be freely used under Attribution-ShareAlike license, unless stated otherwise. Cite this article:
Coffin Bay National Park Facts for Kids. Kiddle Encyclopedia.