Kids Encyclopedia Facts
This page is about an Australian shorebird. For the shorebird from Europe and Asia sometimes called "common pied oystercatcher", see Eurasian oystercatcher.

The name "oystercatcher" is something of a misnomer for this species, because they seldom eat oysters, which are found mainly on rocky coastlines. Pied oystercatchers frequent sandy coastlines, where they feed mainly on bivalve molluscs, which are prised apart with their specially adapted bill.

This Australian species is easily recognized by the characteristic 5–8 cm long orange-red beak, slender pink legs and black and white plumage. With the wings extended, a white wing-stripe is also visible. The male and female show little differentiation, except that the males generally sport a shorter, wider beak. 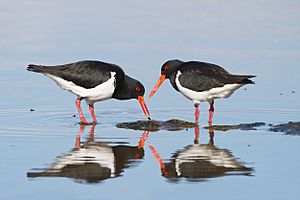 A pair of adult pied oystercatchers in Tasmania, Australia. The one on the left is flicking a small mussel into its mouth.

Pied oystercatchers feed mainly on bivalve molluscs, but also take other invertebrates. The techniques they use to break open the shells of the molluscs vary greatly and are thought to be learned behavior.

They nest in shallow scrapes made in open areas near the shore and produce 2–3 eggs in a typical clutch. Each couple protects its nesting area and often uses the same area year after year. Like the gulls they share the shore with, oystercatchers will band together to mob a perceived threat.

The pied oystercatcher is considered federally to be 'secure' and in New South Wales, Australia, is listed as 'endangered'.

All content from Kiddle encyclopedia articles (including the article images and facts) can be freely used under Attribution-ShareAlike license, unless stated otherwise. Cite this article:
Pied oystercatcher Facts for Kids. Kiddle Encyclopedia.