A museum which features audio and visual displays is located off White Flat Road, northwest of Poonindie. Grounds include a playground, tennis court, coin-operated barbecues and a picnic area. Grounds are open 7 days. The museum is open Monday to Friday, from 9am to 4pm. 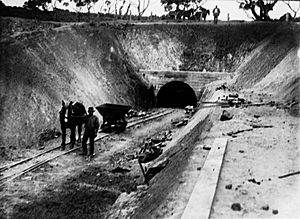 Seven lives were lost during the dam's construction. In late 1918, three men were killed in a cave-in. Another four died in two separate blasting accidents in 1921. A memorial to all seven men was erected at the picnic area near the embankment in 1982.

The catchment yield for the Tod River is estimated to be 11 gigalitres per annum., though this can reduce significantly during periods of drought.

While for some years up to 3,000 ML/year of water was extracted from the reservoir for potable use, negligible water has been extracted since 2001-2002. Reasons for the change include increasing salinity and concerns about the levels of agricultural chemicals in the reservoir. The reservoir has been retained as a ‘contingency' water supply measure since that time.

In April 2011, the Department for Water listed three possible options for the future use of the Tod Reservoir. They were:

There is widespread support in the Eyre Peninsula community for recommissioning the Tod Reservoir using desalination.

SA Water investigated this option and concluded it was not viable because of the difficulty in finding an environmentally suitable location for brine waste disposal. SA Water also concluded there was insufficient volume of water available in the reservoir to justify desalination. Alternative views exist, with others suggesting that desalination could be viable with some further engineering and catchment management considerations.

In 2013, the reservoir's future has been the topic of Parliamentary debate, including speculation over its future use by iron ore mining company, Centrex Metals Ltd.

In September 2014, the Port Lincoln Times reported that the Tod River Reservoir would be opened to recreational fishing and would be stocked with "recreationally attractive species." The change was expected to occur within the 2014-2015 financial year.

All content from Kiddle encyclopedia articles (including the article images and facts) can be freely used under Attribution-ShareAlike license, unless stated otherwise. Cite this article:
Tod Reservoir Facts for Kids. Kiddle Encyclopedia.