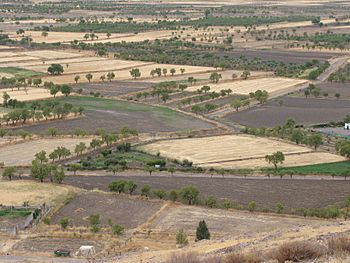 Dryland farming in the Granada region of Spain

Dryland farming and dry farming encompass specific agricultural techniques for the non-irrigated cultivation of crops. Dryland farming is associated with drylands, areas characterized by a cool wet season (which charges the soil with virtually all the moisture that the crops will receive prior to harvest) followed by a warm dry season. They are also associated with arid conditions, areas prone to drought and those having scarce water-resources. 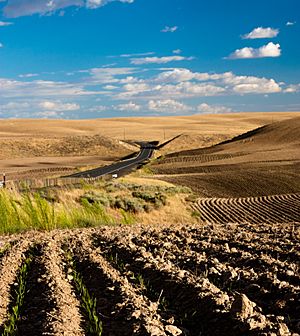 Fields in the Palouse, Washington State 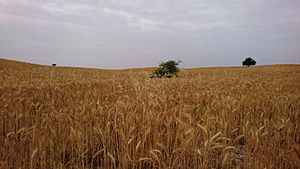 Dryland farming is used in the Great Plains, the Palouse plateau of Eastern Washington, and other arid regions of North America such as in the Southwestern United States and Mexico (see Agriculture in the Southwestern United States and Agriculture in the prehistoric Southwest), the Middle East and in other grain growing regions such as the steppes of Eurasia and Argentina. Dryland farming was introduced to southern Russia and Ukraine by Ukrainian Mennonites under the influence of Johann Cornies, making the region the breadbasket of Europe. In Australia, it is widely practiced in all states but the Northern Territory.

Dryland farmed crops may include winter wheat, maize, beans, sunflowers or even watermelon. Successful dryland farming is possible with as little as 230 millimetres (9 in) of precipitation a year; higher rainfall increases the variety of crops. Native American tribes in the arid Southwest survived for thousands of years on dryland farming in areas with less than 250 millimetres (10 in) of rain. The choice of crop is influenced by the timing of the predominant rainfall in relation to the seasons. For example, winter wheat is more suited to regions with higher winter rainfall while areas with summer wet seasons may be more suited to summer growing crops such as sorghum, sunflowers or cotton.

Dryland farming has evolved as a set of techniques and management practices used by farmers to continually adapt to the presence or lack of moisture in a given crop cycle. In marginal regions, a farmer should be financially able to survive occasional crop failures, perhaps for several years in succession. Survival as a dryland farmer requires careful husbandry of the moisture available for the crop and aggressive management of expenses to minimize losses in poor years. Dryland farming involves the constant assessing of the amount of moisture present or lacking for any given crop cycle and planning accordingly. Dryland farmers know that to be financially successful they have to be aggressive during the good years in order to offset the dry years. 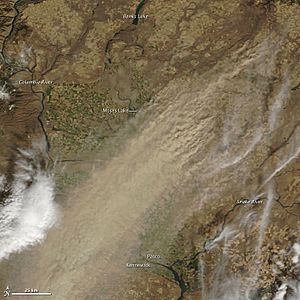 Dryland farming is dependent on natural rainfall, which can leave the ground vulnerable to dust storms, particularly if poor farming techniques are used or if the storms strike at a particularly vulnerable time. The fact that a fallow period must be included in the crop rotation means that fields cannot always be protected by a cover crop, which might otherwise offer protection against erosion.

Some of the theories of dryland farming developed in the late 19th and early 20th centuries claimed to be scientific but were in reality pseudoscientific and did not stand up to empirical testing. For example, it was alleged that tillage would seal in moisture, but such "dust mulching" ideas are based on what people imagine should happen, or have been told, rather than what testing actually confirms. The book Bad Land: An American Romance explores the effects that this had on people who were encouraged to homestead in an area with little rainfall; most smallholdings failed after working miserably to cling on.

Capturing and conservation of moisture – In regions such as Eastern Washington, the average annual precipitation available to a dryland farm may be as little as 220 millimetres (8.5 in) . In the Horse Heaven Hills in central Washington, wheat farming has been productive purportedly on an average annual rainfall approaching 6 inches. Consequently, moisture must be captured until the crop can utilize it. Techniques include summer fallow rotation (in which one crop is grown on two seasons' precipitation, leaving standing stubble and crop residue to trap snow), and preventing runoff by terracing fields.

"Terracing" is also practiced by farmers on a smaller scale by laying out the direction of furrows to slow water runoff downhill, usually by plowing along either contours or keylines. Moisture can be conserved by eliminating weeds and leaving crop residue to shade the soil.

Effective use of available moisture – Once moisture is available for the crop to use, it must be used as effectively as possible. Seed planting depth and timing are carefully considered to place the seed at a depth at which sufficient moisture exists, or where it will exist when seasonal precipitation falls. Farmers tend to use crop varieties which are drought-tolerant and heat-stress tolerant (even lower-yielding varieties). Thus the likelihood of a successful crop is hedged if seasonal precipitation fails.

Soil conservation – The nature of dryland farming makes it particularly susceptible to erosion, especially wind erosion. Some techniques for conserving soil moisture (such as frequent tillage to kill weeds) are at odds with techniques for conserving topsoil. Since healthy topsoil is critical to sustainable dryland agriculture, its preservation is generally considered the most important long-term goal of a dryland farming operation. Erosion control techniques such as windbreaks, reduced tillage or no-till, spreading straw (or other mulch on particularly susceptible ground), and strip farming are used to minimize topsoil loss.

Control of input costs – Dryland farming is practiced in regions inherently marginal for non-irrigated agriculture. Because of this, there is an increased risk of crop failure and poor yields which may occur in a dry year (regardless of money or effort expended). Dryland farmers must evaluate the potential yield of a crop constantly throughout the growing season and be prepared to decrease inputs to the crop such as fertilizer and weed control if it appears that it is likely to have a poor yield due to insufficient moisture. Conversely, in years when moisture is abundant, farmers may increase their input efforts and budget to maximize yields and to offset poor harvests.

Dry farming may be practiced in areas that have significant annual rainfall during a wet season, often in the winter. Crops are cultivated during the subsequent dry season, using practices that make use of the stored moisture in the soil. California, Colorado, Oregon and Wyoming, in the United States, are a few states where dry farming is practiced for a variety of crops.

Dry farmed crops may include grapes, tomatoes, pumpkins, beans, and other summer crops. These crops grow using the winter water stored in the soil, rather than depending on rainfall during the growing season.

Dry farming depends on making the best use of the "bank" of soil moisture that was created by winter rainfall. Some dry farming practices include: 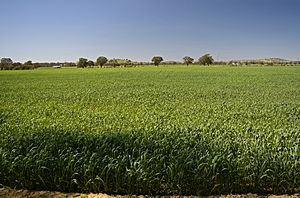 An example of a dryland farming paddock

As an area of research and development, arid-zone agriculture, or desert agriculture, includes studies of how to increase the agricultural productivity of lands dominated by lack of freshwater, an abundance of heat and sunlight, and usually one or more of: Extreme winter cold, short rainy season, saline soil or water, strong dry winds, poor soil structure, over-grazing, limited technological development, poverty, or political instability.

The two basic approaches are:

All content from Kiddle encyclopedia articles (including the article images and facts) can be freely used under Attribution-ShareAlike license, unless stated otherwise. Cite this article:
Dryland farming Facts for Kids. Kiddle Encyclopedia.