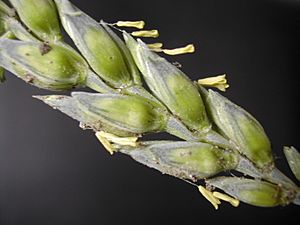 An ear of winter wheat. 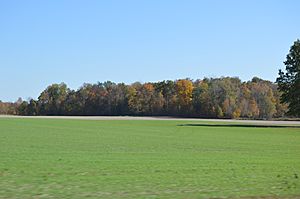 Winter wheat with fall colors in the eastern United States

Winter wheat (usually Triticum aestivum) are strains of wheat that are planted in the autumn to germinate and develop into young plants that remain in the vegetative phase during the winter and resume growth in early spring. Classification into spring or winter wheat is common and traditionally refers to the season during which the crop is grown. For winter wheat, the physiological stage of heading is delayed until the plant experiences vernalization, a period of 30 to 60 days of cold winter temperatures (0° to 5 °C; 32–41 °F).

Winter wheat is usually planted from September to November (in the Northern Hemisphere) and harvested in the summer or early autumn of the next year. In some places (e.g. Chile) a winter-wheat crop fully 'completes' in a year's time before harvest. Winter wheat usually yields more than spring wheat.

So-called "facultative" wheat varieties need shorter periods of vernalization time (15–30 days) and temperatures of 3° to 15 °C (37–59 °F). In many areas facultative varieties can be grown either as winter or as a spring, depending on time of sowing.

In countries that experience mild winters, such as in South Asia (India, Pakistan, Nepal, Bangladesh), North Africa, the Middle East and the lower latitudes (e.g. Sonora in Mexico), spring wheat (not requiring a period of vernalization) is also sown in the autumn (November/December) and harvested in late spring (April–May) the next year. This spring wheat planted in the autumn and grown over the winter is sometimes also incorrectly called "winter wheat".

Hard winter wheats have a higher gluten protein content than other wheats. They are used to make flour for yeast breads, or are blended with soft spring wheats to make the all-purpose flour used in a wide variety of baked products. Pure soft wheat is used for specialty or cake flour. Durum, the hardest wheat, is primarily used for making pasta. Almost all durum wheat grown in North America is spring-planted.

Winter wheat is grown throughout Europe and North America, and in Siberia.

Winter wheat is grown as a cash crop or a cover crop. Optimal growing conditions for winter wheat include high-drainage soil with medium texture. Mid-quality soil nutrient content is best for winter wheat with an appropriate supply of nitrogen being critical for the wheat to be able to establish itself in time before winter dormancy. In addition, a firm seedbed helps protect the wheat over the winter period.

Winter wheat was brought to Kansas by German-Russian Mennonites in the 19th century. Bernhard Warkentin and Mark A. Carleton played a major part in the spread of winter wheat as a commercial crop. Warkentin organized mills in central Kansas and imported seed from Ukraine to meet growing demand. Carleton worked for the United States Department of Agriculture (USDA) as a crop explorer. He went to Russia to find other wheat varieties and worked with Kansas State University researchers to develop new ones. Winter wheat production quickly spread throughout the Great Plains, and was, as it still is, usually grown using the techniques of dryland farming.

All content from Kiddle encyclopedia articles (including the article images and facts) can be freely used under Attribution-ShareAlike license, unless stated otherwise. Cite this article:
Winter wheat Facts for Kids. Kiddle Encyclopedia.