Kansas State University (KSU), commonly shortened to Kansas State or K-State, is a public research university with its main campus in Manhattan, Kansas, United States. Kansas State was opened as the state's land-grant college in 1863 – the first public institution of higher learning in the state of Kansas. It had a record high enrollment of 24,766 students for the Fall 2014 semester.

The university is classified as one of 115 research universities with highest research activity (R1) by the Carnegie Classification of Institutions of Higher Education.

Branch campuses are in Salina and Olathe. The Kansas State University Polytechnic Campus in Salina is home to the College of Technology and Aviation. The Olathe Innovation Campus has a focus on graduate work in research bioenergy, animal health, plant science and food safety and security. 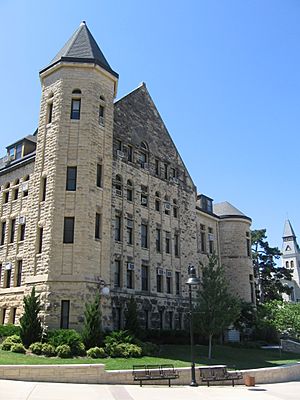 The effort to establish the school began in 1861, the year that Kansas was admitted to the United States. One of the new state legislature's top priorities involved establishing a state university.

Kansas State University, originally named Kansas State Agricultural College, was founded in Manhattan on February 16, 1863, during the American Civil War. K-State is the third-oldest school in the Big 12 Conference and the oldest public institution of higher learning in the state of Kansas.

All content from Kiddle encyclopedia articles (including the article images and facts) can be freely used under Attribution-ShareAlike license, unless stated otherwise. Cite this article:
Kansas State University Facts for Kids. Kiddle Encyclopedia.