Olathe ( oh-LAY-thə) is a city in, and is the county seat of, Johnson County, Kansas, United States. Located in northeastern Kansas, it is also the fourth most populous city in the state, with a population of 125,872 recorded by the 2010 census. Olathe is also the fourth-largest city in the Kansas City metropolitan area. It is bordered by the cities of Lenexa to the north, Overland Park to the east, De Soto to the northwest, and Gardner to the southwest.

Olathe was founded by Dr. John T. Barton in the spring of 1857. He rode to the center of Johnson County, Kansas, and staked two quarter sections of land as the town site. He later described his ride to friends: "...the prairie was covered with verbena and other wild flowers. I kept thinking the land was beautiful and that I should name the town Beautiful." Purportedly, Barton asked a Shawnee interpreter how to say "Beautiful" in his native language. The interpreter responded, "Olathe."

Olathe was incorporated as a city in 1857.

While Olathe was not the first city established in Johnson County, it quickly became the largest and was named the county seat in October 1859. The city's early days were filled with violence, as pro-slavery forces from nearby Missouri often clashed with local abolitionists. These conflicts were known on a large scale as Bleeding Kansas.

As the 1850s came to a close, and as Kansas entered the Union as a free state in 1861, the violence lessened. However, a year later, Confederate guerrillas from Missouri led by William Quantrill surprised the residents and raided the city on September 7, 1862, killing a half dozen men, robbing numerous businesses and private homes, and destroying most of the city. Quantrill launched the raid because the people of Olathe were known for their abolitionism. Throughout the Civil War a military post operated in Olathe. The post probably was established in 1861 and was located on the public square on which the Johnson County Courthouse has sat since that time. In March 1862 one company of troops were known to have been stationed there. When Quantrill raided Olathe on September 6, 1862, more than 125 Union soldiers, almost all of them recruits, were there. They surrendered to Quantrill and were compelled to take an oath forbidding them from taking up arms against the Confederacy. It was decided in November that the recruits and soldiers in Olathe could not be compelled to obey oaths extracted by guerrillas, as such forces were not recognized as legitimate enemy military units.

Kansas militia occupied the Olathe military post through much of the Civil War and Army troops were there much of the time, as well. Twice more Olathe was threatened by Confederates. On August 20–21, 1863, Quantrill again passed through the area when he raided Lawrence, Kansas (see Lawrence Massacre). Many Union troops moved into and out of Olathe on those two days. The second time was on October 24-5, 1864, when Confederate Maj. Gen. Sterling Price and a force of 10,000 men passed the area on their retreat south (see Price's Raid).

The military post existed beyond the end of the Civil War, being deactivated probably in August 1865.

Olathe served as a stop on the Oregon Trail, the California Trail, and the Santa Fe Trail. Catering to travelers was the main source of income for local stores and businesses. The Mahaffie House, a popular resupply point for wagons headed westward, is today a registered historical site maintained by the City of Olathe. The staff wears period costumes, and stagecoach rides and farm animals make the site a favorite among children. Visitors can participate in Civil War re-enactments, Wild West Days, and other activities.

After the construction of the transcontinental railroad, the trails to the west lost importance, and Olathe faded into obscurity and remained a small, sleepy prairie town.

In the 1950s, the construction of the Interstate Highway system and, more directly, I-35, linked Olathe to nearby Kansas City. The result was tremendous residential growth as Olathe became a part of the Kansas City metropolitan area. In the 1980s, Olathe experienced tremendous commercial growth, which also drew more residents. It is estimated that Olathe's population surpassed 100,000 in 2001, and current projections show Olathe's growth continuing as the city expands into the farm fields south, west and north of town.

In 2008, the US Census Bureau ranked Olathe the 24th fastest-growing city in the nation. The same year, CNN/Money and Money magazine ranked Olathe #11 on its list of the "100 Best Cities to Live in the United States."

The area receives about 40 inches (1,000 mm) of precipitation during an average year with the largest share being received in May and June—the April–June period averages 30 days of measurable precipitation. During a typical year the total amount of precipitation may be anywhere from 28 to almost 53 inches. There are on average 95 days of measurable precipitation per year. Winter snowfall averages about 19 inches, but the median is 13 inches (330 mm). Measurable snowfall occurs an average of 9 days per year with at least an inch of snow being received on seven of those days. Snow depth of at least an inch occurs an average of 25 days per year.

There were 44,507 households of which 44.1% had children under the age of 18 living with them, 60.9% were married couples living together, 9.6% had a female householder with no husband present, 4.3% had a male householder with no wife present, and 25.2% were non-families. 20.0% of all households were made up of individuals and 5.3% had someone living alone who was 65 years of age or older. The average household size was 2.80 and the average family size was 3.24.

There were 32,314 households out of which 45.1% had children under the age of 18 living with them, 63.8% were married couples living together, 9.0% had a female householder with no husband present, and 23.8% were non-families. 18.4% of all households were made up of individuals and 3.7% had someone living alone who was 65 years of age or older. The average household size was 2.83 and the average family size was 3.24. 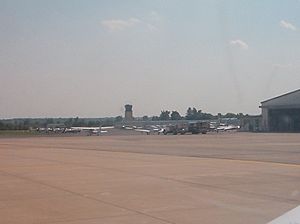 All content from Kiddle encyclopedia articles (including the article images and facts) can be freely used under Attribution-ShareAlike license, unless stated otherwise. Cite this article:
Olathe, Kansas Facts for Kids. Kiddle Encyclopedia.