Airport from the east. The overhaul base is in the lower left corner of the field. The proposed Central Terminal would be on the left at the end of the runway.

Kansas City Overhaul Base in 2007 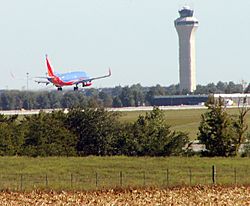 Kansas City International Airport (IATA: MCI, ICAO: KMCI, FAA LID: MCI) (originally Mid-Continent International Airport) is a public airport. It is 15 miles (24 km) northwest of downtown Kansas City in Platte County, Missouri. In 2018, 11,850,825 people used the airport. 2018 was the second busiest year in its history. Its largest carriers are Southwest Airlines and Delta Air Lines. Both of them have many flights every day in Terminal B.

Airlines and places to go 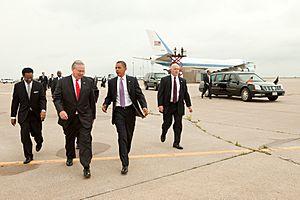 All content from Kiddle encyclopedia articles (including the article images and facts) can be freely used under Attribution-ShareAlike license, unless stated otherwise. Cite this article:
Kansas City International Airport Facts for Kids. Kiddle Encyclopedia.