Originally named Chicago Air Park, Midway Airport was built on a 320-acre (1.3 km2) plot in 1923 with one cinder runway that primarily served airmail services. In 1926 the city leased the airport for commercial purposes. The airport was designated as Chicago Municipal Airport on December 12, 1927. By 1928 the airport had twelve hangars and four runways, lit for night operations.

In 1931 a new passenger terminal opened at 62nd St; the following year the airport claimed to be the "World's Busiest" with over 100,846 passengers on 60,947 flights. The March 1939 OAG shows 47 weekday departures: 13 on United, 13 American, 9 TWA, 4 Northwest and two each on Eastern, Braniff, Pennsylvania Central and C&S. New York's airport (Newark, then LaGuardia by the end of 1939) was then the busiest airline airport in the United States, but Midway passed LaGuardia in 1948 and kept the title until 1960.

More construction was funded in part by $1 million from the Works Progress Administration; the airport expanded to fill the square mile in 1938–41 after a court ordered the Chicago and Western Indiana Railroad to reroute tracks that had crossed the square along the north edge of the older field. 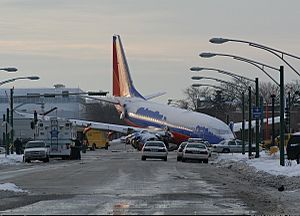 The Southwest airplane that crashed in December 2005.

On June 30, 1956, United Airlines Flight 718, a Douglas DC-7, was headed for Midway Airport. Over the Grand Canyon it collided with a TWA Super Constellation, killing all 128 people on both planes. This became the impetus for the modern air traffic control system.

Exactly 33 years later, on December 8, 2005, Southwest Airlines Flight 1248, a Boeing 737-700 inbound from Baltimore-Washington International Airport in Baltimore, Maryland, slid off the runway while attempting to land at the airport in a heavy snow storm. The airplane broke through the barrier fence of the airport, and came to rest at the intersection of 55th Street and Central Avenue bordering the airport at its northwest corner. A 6-year-old boy was killed as a passenger in a vehicle that was struck by the plane after it skidded into the street. 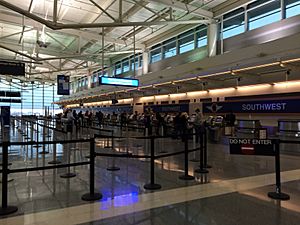 All content from Kiddle encyclopedia articles (including the article images and facts) can be freely used under Attribution-ShareAlike license, unless stated otherwise. Cite this article:
Chicago Midway International Airport Facts for Kids. Kiddle Encyclopedia.