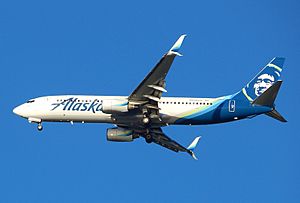 Alaska Airlines (NYSE: ALK) is a large airline from the United States. They are headquartered in Seattle, Washington, where they have one of their four hubs. Alaska Airlines also has hubs in Anchorage, Alaska, Los Angeles, California and Portland, Oregon. The company was named the top "Traditional Carrier" in customer satisfaction for the third year in a row by J. D. Power and Associates. As of 2016, it goes to 104 cities and has 164 airplanes.

All content from Kiddle encyclopedia articles (including the article images and facts) can be freely used under Attribution-ShareAlike license, unless stated otherwise. Cite this article:
Alaska Airlines Facts for Kids. Kiddle Encyclopedia.