Nome ( Siqnazuaq in Iñupiaq) is a city in the Nome Census Area in the Unorganized Borough of the U.S. state of Alaska. The city is located on the southern Seward Peninsula coast on Norton Sound of the Bering Sea. According to the 2010 Census, the city population was 3,598. The 2014 population estimate was 3,788, suggesting a slight increase. Nome was incorporated on April 9, 1901, and was once the most populous city in Alaska. Nome lies within the region of the Bering Straits Native Corporation.

The city of Nome claims to be home to the world's largest gold pan, although this claim has been disputed by the Canadian city of Quesnel, British Columbia.

In the winter of 1925, a diphtheria epidemic raged among Alaska Natives in the Nome area. Fierce territory-wide blizzard conditions prevented delivery of a life-saving serum by airplane from Anchorage. A relay of dog sled teams was organized to deliver the serum. 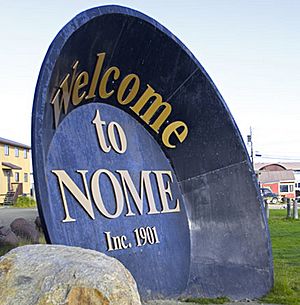 The origin of the city's name "Nome" is debated; there are three theories. The first is that the name was given by Nome's founder, Jafet Lindeberg: within trekking distance of his childhood home in Kvænangen, Norway, there is a Nome valley (Norwegian: Nomedalen).

A second theory is that Nome received its name through an error: allegedly when a British cartographer copied an ambiguous annotation made by a British officer on a nautical chart, while on a voyage up the Bering Strait. The officer had written "? Name" next to the unnamed cape. The mapmaker misread the annotation as "C. Nome", or Cape Nome, and used that name on his own chart; the city in turn took its name from the cape.

The third proposed origin of the name is from a misunderstanding of the local Inupiaq word for "Where at?", Naami.

In February 1899, some local miners and merchants voted to change the name from Nome to Anvil City, because of the confusion with Cape Nome, 12 miles (19 km) south, and the Nome River, the mouth of which is 4 mi (6.4 km) south of Nome. The United States Post Office in Nome refused to accept the change. Fearing a move of the post office to Nome City, a mining camp on the Nome River, the merchants unhappily agreed to change the name of Anvil City back to Nome. 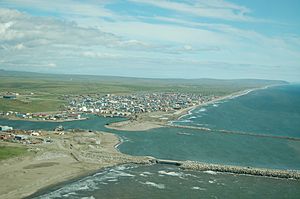 Nome has a subarctic climate (Köppen Dfc), with long, very cold winters, and short, cool summers. However, conditions in both winter and summer are moderated by the city's coastal location: winters are less severe than in the Interior, and conversely, summers are lukewarm. For example, Fairbanks at a similar parallel quite far inland has much greater temperature swings with both very warm and cold temperatures throughout the year. 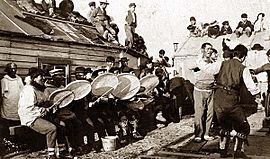 Eskimo music and dance near Nome, 1900

There were 1,184 households out of which 38.9% had children under the age of 18 living with them, 41.7% were married couples living together, 12.3% had a female householder with no husband present, and 36.7% were non-families. 27.4% of all households were made up of individuals and 3.7% had someone living alone who was 65 years of age or older. The average household size was 2.79 and the average family size was 3.45.

The population of Nome is a mixture of Inupiat Eskimos and non-Natives. Although some employment opportunities are available, subsistence activities are prevalent in the community. A federally recognized tribe is located in the community—the Nome Eskimo Community. Former villagers from King Island also live in Nome. The ANCSA village corporation in Nome is Sitnasuak Native Corporation. 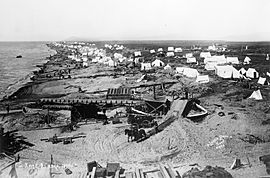 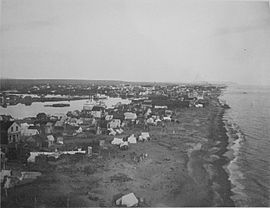 Inupiat hunted for game on the west coast of Alaska from prehistoric times and there is recent archeological evidence to suggest that there was an Inupiat settlement at Nome, known in Inupiat as Sitnasuak, before the discovery of gold.

In the summer of 1898, the "Three Lucky Swedes": Norwegian-American Jafet Lindeberg, and two naturalized American citizens of Swedish birth, Erik Lindblom and John Brynteson, discovered gold on Anvil Creek. News of the discovery reached the outside world that winter. By 1899, Nome had a population of 10,000 and the area was organized as the Nome mining district. In that year, gold was found in the beach sands for dozens of miles along the coast at Nome, which spurred the stampede to new heights. Thousands more people poured into Nome during the spring of 1900 aboard steamships from the ports of Seattle and San Francisco. By 1900, a tent city on the beaches and on the treeless coast reached 48 km (30 mi), from Cape Rodney to Cape Nome. In June of that year, Nome averaged 1000 newcomers a day.

Many late-comers tried to "jump" the original claims by filing mining claims covering the same ground. The federal judge for the area ruled the original claims valid, but some of the claim jumpers agreed to share their invalid claims with influential Washington politicians. Alexander McKenzie took an interest in the gold rush and secured the appointment of Arthur Noyes as the federal district judge for the Nome region for the purpose of taking control of gold placer mines in Nome. McKenzie seized mining claims with an unlawfully procured receivership granted by Judge Noyes. McKenzie's claim-jumping scheme was eventually stopped by the federal Ninth Circuit Court of Appeals. However, the episode provided the plot for Rex Beach's best-selling novel The Spoilers (1906), which was made into a stage play, then five times into movies, including two versions starring John Wayne: The Spoilers (1942 film) (co-starring Marlene Dietrich) and North to Alaska (1960, the theme of which mentions Nome.) Wyatt Earp, of Tombstone, Arizona fame, stayed in Nome for a short period, but little is known of his activities there.

During the period from 1900−1909, estimates of Nome's population reached as high as 20,000. The highest recorded population of Nome, in the 1900 United States census, was 12,488. At this time, Nome was the largest city in the Alaska Territory. Early in this period, the U.S. Army policed the area, and expelled any inhabitant each autumn who did not have shelter (or the resources to pay for shelter) for the harsh winter.

In May 1910, the Industrial Worker, the newspaper of the Industrial Workers of the World (IWW), published a notice from the Nome Miners' Union and Local 240 of the Western Federation of Miners for all unemployed workers to stay away, saying that "[a]ll the rich mines are practically worked out." 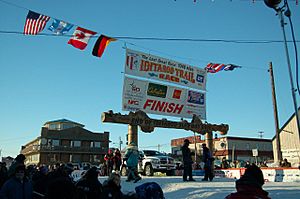 In 1925, Nome was the destination of the famous Great Race of Mercy, where dog sleds played a large part in transporting diphtheria serum through harsh conditions. In 1973, Nome became the ending point of the 1,049+ mi (1,600+ km) Iditarod Trail Sled Dog Race.

The sled driver of the final leg of the relay was the Norwegian-born Gunnar Kaasen; his lead sled dog was Balto. A statue of Balto by F.G. Roth stands near the zoo in Central Park, New York City. Leonhard Seppala ran the penultimate, and longest, leg of the 1925 serum run to Nome. One of his dogs, Togo, is considered the forgotten hero of the Great Race of Mercy; another of his dogs, Fritz, is preserved and on display at the Carrie M. McLain Memorial Museum in Nome.

During World War II, Nome was the last stop on the ferry system for planes flying from the United States to the Soviet Union for the Lend-lease program. The airstrip currently in use was built and troops were stationed there. One "Birchwood" hangar remains and has been transferred to a local group with hopes to restore it. It is not located on the former Marks Air Force Base (now the primary Nome Airport); rather it is a remnant of an auxiliary landing field a mile or so away: "Satellite Field". In the hills north of the city, there were auxiliary facilities associated with the Distant Early Warning system that are visible from the city but are no longer in use. Nome's population decline continued after 1910 although at a fairly slow rate.

Total gold production for the Nome district has been at least 3.6 million ounces.

By 1950 Nome had 1,852 inhabitants. By 1960 the population of Nome had climbed to 2,316. At this point placer gold mining was still the leading economic activity. The local Alaska Native population was involved in ivory carving and the U.S. military had stationed troops in the city also contributing to the local economy.

The Hope Sled Dog Race was run between Anadry, Russia and Nome after the fall of the Soviet Union. The race continued for more than a decade, but has not been run since approximately 2004.

Nome is a regional center of transportation for surrounding villages. There are two state-owned airports.

Nome has a seaport, used by freight ships and cruise ships, located at 64° 30’ N and 165° 24’ W on the southern side of the Seward Peninsula in Norton Sound. The Corps of Engineers completed the Nome Harbor Improvements Project in the summer of 2006 adding a 3,025 ft (922 m) breakwater east of the existing Causeway and a 270 ft (82 m) spur on the end of the Causeway making it to a total of 2,982 feet (909 m). The City Dock (south) on the Causeway is equipped with marine headers to handle the community's bulk cargo and fuel deliveries. The City Dock is approximately 200 feet (61 m) in length with a depth of 22.5 feet (MLLW). The WestGold Dock (north) is 190 feet (58 m) in length with the same depth of 22.5 feet (ML,LW). The Westgold dock handles nearly all of the exported rock/gravel for this region and is the primary location to load/unload heavy equipment. The opening between the new breakwater and the Causeway (Outer Harbor Entrance) is approximately 500 feet (150 m) in width and serves as access to both Causeway deep water docks and the new Snake River entrance that leads into the Small Boat Harbor. The old entrance along the seawall has been filled in and is no longer navigable. (See photos on website) Buoys outline the navigation channel from the outer harbor entrance into the inner harbor. The Nome Small Boat Harbor has a depth of 10 feet (MLLW) and offers protected mooring for recreational and fishing vessels alongside 2 floating docks. Smaller cargo vessels and landing crafts load village freight and fuel at the east, west and south inner harbor sheet pile docks, east beach landing and west barge ramp for delivery in the region. A new addition to the Nome facility in 2005 was a 60-foot-wide (18 m) concrete barge ramp located inside the inner harbor just west of the Snake River entrance. The ramp provides the bulk cargo carriers with a suitable location closer to the Causeway to trans-load freight to landing crafts and roll equipment on and off barges. This location also has approximately 2 acres (8,100 m2) of uplands to be used for container, vessel and equipment storage. 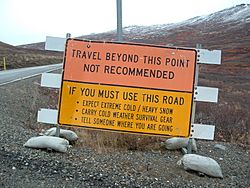 The road system leading from Nome is extensive, though sparsely used during the winter months and leads mostly through remote terrain

Local roads lead to Council, the Kougarok River, and Teller: the Nome-Council, Nome-Taylor, and Nome-Teller Highways respectively. There are also smaller roads to communities up to 87 miles (140 km) from Nome, yet no road connection to the other major cities of Alaska. There are no railroads going to or from Nome. A 500-mile (800 km) road project (Manley Hot Springs–Nome) is being discussed in Alaska. It has been estimated (in 2010) to cost $2.3 to $2.7 billion, or approximately $5 million per mile.

All content from Kiddle encyclopedia articles (including the article images and facts) can be freely used under Attribution-ShareAlike license, unless stated otherwise. Cite this article:
Nome, Alaska Facts for Kids. Kiddle Encyclopedia.