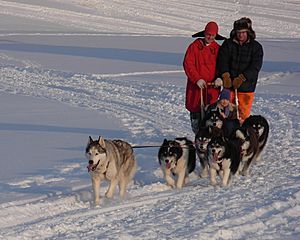 Dogs pulling people on a sled.

A dog sled is a sled that is pulled by sled dogs and can go over ice and snow. Dog sleds were first made by First Nations people in Canada before the English and French got there, because they had no horses so they used dogs to travel. They were also made by people in Norway, Sweden, Finland and Russia because it was also easier to travel with dogs in parts of those countries.

Racing dog sleds is a popular sport which a lot of people enjoy watching or actually going in the sleds to race. It is more popular in places where there is not much horse racing.

Dog power has been used for hunting and travel for over a thousand years. As far back as the 10th century BCE these dogs have contributed to human culture.

Assembling a dog sled team involves picking leader dogs, point dogs, swing dogs, and wheel dogs. The lead dog is crucial, so mushers take particular care of these dogs. Another important detail is to have powerful wheel dogs to pull the sled out from the snow. Point dogs (optional) are located behind the leader dogs, swing dogs between the point and wheel dogs, and team dogs are all other dogs in between the wheel and swing dogs and are selected for their endurance, strength and speed as part of the team. In dog sledding, Siberian Huskies or Alaskan Malamutes are the main types of dogs that are used for recreational sledding because of their strength and speed and endurance as well as their ability to withstand the cold. However, Alaskan Huskies (a mix between Siberian Huskies and Alaskan Malamutes) are also a popular dog for sled dog racing, because of their endurance, good eating habits, speed, and dedication to running even when tired.

Sometimes, for sprint races, mushers use short haired hounds that are faster than the average husky. These hounds are raised from a young age to pull. It is harder to train hounds than it is to train Siberian Huskies and Malamutes to pull a sled because it is not in their nature. Training should start at around six months of age by pulling a small log behind them.

All content from Kiddle encyclopedia articles (including the article images and facts) can be freely used under Attribution-ShareAlike license, unless stated otherwise. Cite this article:
Dog sled Facts for Kids. Kiddle Encyclopedia.