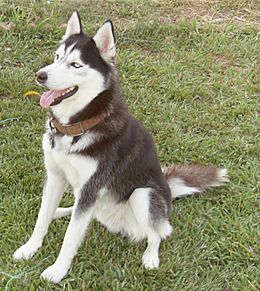 The Siberian Husky is a medium-sized working dog. It is quick and graceful. They have a compact and furry body, pointed ears, and a bushy tail. The husky is a sled dog. It is used for carrying a light load over great distances. Huskies show a balance of power, speed and endurance. Male huskies are usually thicker in appearance than female huskies.

The personality of the Siberian Husky is friendly and gentle. They are also alert and outgoing. They do not act possessive like a guard dog. They are curious, but they are not usually aggressive with other dogs. A husky's intelligence, and friendly behavior make them a favorable companion. They usually have long fur. 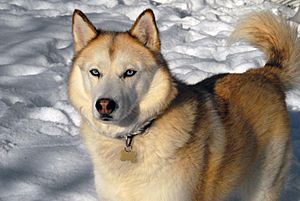 A Siberian Husky has a double coat that is thicker than that of most other dog breeds. It has two layers: a dense undercoat and a longer topcoat of short, straight guard hairs. It protects the dogs effectively against harsh Arctic winters, and also reflects heat in the summer. It is able to withstand temperatures as low as −50 to −60 °C (−58 to −76 °F). The undercoat is often absent during shedding. Their thick coats require weekly grooming.

Siberian Huskies come in a variety of colors and patterns, usually with white paws and legs, facial markings, and tail tip. The most common coats are black and white, then less common copper-red and white, grey and white, pure white, and the rare "agouti" coat, though many individuals have blondish or piebald spotting. Some other individuals also have the "saddle back" pattern, in which black-tipped guard hairs are restricted to the saddle area while the head, haunches and shoulders are either light red or white. Striking masks, spectacles, and other facial markings occur in wide variety. Merle coat patterns are not allowed. The American Kennel Club allows all coat colors from black to pure white. 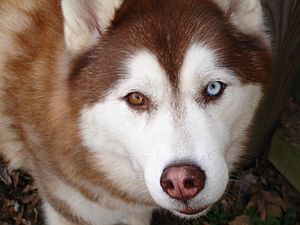 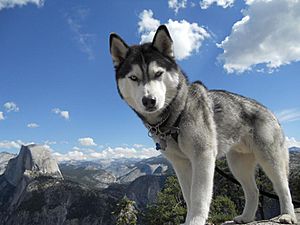 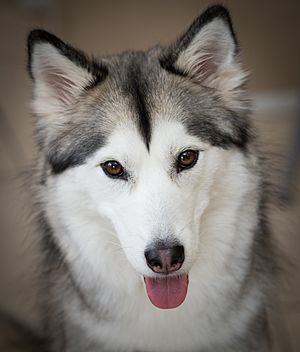 The American Kennel Club describes the Siberian Husky's eyes as "an almond shape, moderately spaced and set slightly obliquely." The AKC breed standard is that eyes may be brown, blue or black; one of each or Particoloured are acceptable (complete is heterochromia). These eye-color combinations are considered acceptable by the American Kennel Club. The parti-color does not affect the vision of the dog.

Show-quality dogs are preferred to have neither pointed nor square noses. The nose is black in gray dogs, tan in black dogs, liver in copper-colored dogs, and may be light tan in white dogs. In some instances, Siberian Huskies can exhibit what is called "snow nose" or "winter nose." This condition is called hypopigmentation in animals. "Snow nose" is acceptable in the show ring. 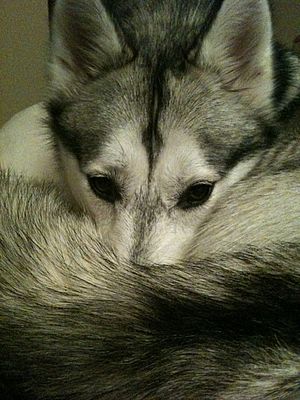 Siberian Husky tails are heavily furred; these dogs will often curl up with their tails over their faces and noses in order to provide additional warmth. As pictured, when curled up to sleep the Siberian Husky will cover its nose for warmth, often referred to as the "Siberian Swirl". The tail should be expressive, held low when the dog is relaxed, and curved upward in a "sickle" shape when excited or interested in something.

The Husky howls instead of barking. They have been described as escape artists, which can include digging under, chewing through, or even jumping over fences.

Because the Siberian Husky had been raised in a family setting by the Chukchi and not left to fend for themselves they could be trusted with children. The ASPCA classifies the breed as good with children. It also states they exhibit high energy indoors, have special exercise needs, and may be destructive "without proper care".

Siberian Huskies have a high prey drive due to the Chukchi allowing them to roam free in the summer. The dogs hunted in packs and preyed on wild cats, birds, and squirrels, but with training can be trusted with other small animals. They would only return to the Chukchi villages when the snow returned and food became scarce. Their hunting instincts can still be found in the breed today.

A 6 ft (1.83 m) fence is recommended for this breed as a pet, although some have been known to overcome fences as high as 8 ft (2.44 m). Electric pet fencing may not be effective. They need the frequent companionship of people and other dogs, and their need to feel as part of a pack is very strong.

Siberians gained in popularity with the story of the "Great Race of Mercy," the 1925 serum run to Nome. This made dogs Balto and Togo famous. Several purebred Siberian Huskies played the part of the "half-wolf" companion in the television series Due South.

All content from Kiddle encyclopedia articles (including the article images and facts) can be freely used under Attribution-ShareAlike license, unless stated otherwise. Cite this article:
Siberian Husky Facts for Kids. Kiddle Encyclopedia.