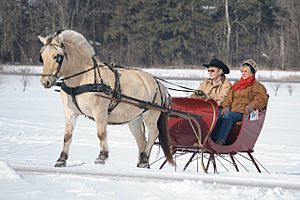 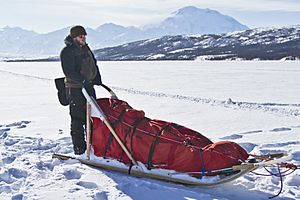 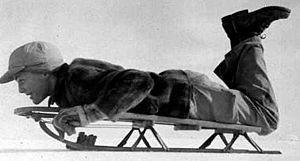 Boy lying on a Flexible Flyer

A sled, sledge, or sleigh is a land vehicle that slides across a surface, usually of ice or snow. It is built with either a smooth underside or a separate body supported by two or more smooth, relatively narrow, longitudinal runners similar in principle to skis. This reduces the amount of friction, which helps to carry heavy loads.

Some designs are used to transport passengers or cargo across relatively level ground. Others are designed to go downhill for recreation, particularly by children, or competition. (Compare cross-country skiing with its downhill cousin.) Shades of meaning differentiating the three terms often reflect regional variations depending on historical uses and prevailing climate.

In British English, sledge is the general term, and more common than sled. Toboggan is sometimes used synonymously with sledge but more often to refer to a particular type of sledge without runners. Sleigh refers to a moderate to large-sized, usually open-topped vehicle to carry passengers or goods, and typically drawn by horses, dogs, or reindeer.

In American usage sled remains the general term but often implies a smaller device, often for recreational use. Sledge implies a heavier sled used for moving freight or massive objects. Sleigh refers more specifically than in Britain to a vehicle which is essentially a cold-season alternative to a carriage or wagon and has seating for passengers; what can be called a dog-sleigh in Britain is known only as a dog-sled in North America.

In Australia, where there is limited snow, sleigh and sledge are given equal preference in local parlance.

The word sled comes from Middle English sledde, which itself has the origins in Middle Dutch word slēde, meaning "sliding" or "slider". The same word shares common ancestry with both sleigh and sledge. The word sleigh, on the other hand, is an anglicized form of the modern Dutch word slee and was introduced to the English language by Dutch immigrants to North America.

Sleds are especially useful in winter but can also be drawn over wet fields, muddy roads, and even hard ground if one helps them along by greasing the blades with oil or alternatively wetting them with water.

Sleds glide with various degrees of friction ranging from very little to fairly little friction on ice, icy snow, wet snow, and dry snow. This means that sleds can slip faster with less resistance on some surfaces than others.

Various types of sleds are pulled by animals such as reindeer, horses, mules, oxen, or dogs. 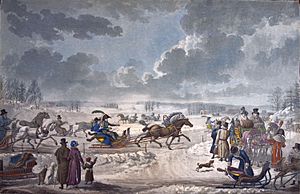 Sleds as the normal form of winter transport near Stockholm c. 1800. 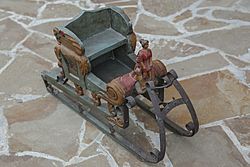 The people of Ancient Egypt are thought to have used sledges extensively in the construction of their public works, in particular for the transportation of heavy obelisks over sand.

Sleds and sledges were found in the Oseberg "Viking" ship excavation. The sledge was also highly prized, because – unlike wheeled vehicles – it was exempt from tolls.

Until the late 19th century, a closed winter sled, or vozok, provided a high-speed means of transport through the snow-covered plains of European Russia and Siberia. It was a means of transport preferred by royals, bishops, and boyars of Muscovy. Several royal vozoks of historical importance have been preserved in the Kremlin Armoury.

Man-hauled sledges were the traditional means of transport on British exploring expeditions to the Arctic and Antarctic regions in the 19th and early 20th centuries. Dog sleds were used by most others, such as Roald Amundsen.

Some of these originally used draft animals but are now more likely to be pulled by an engine (Skidoo or tractor). Some use human power.

Today some people use kites to tow exploration sleds. 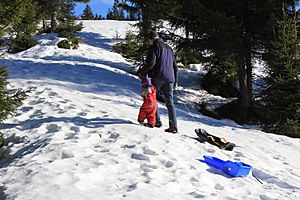 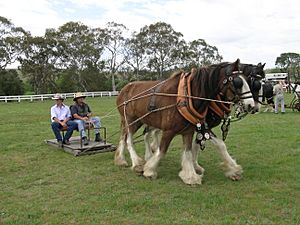 A horse-drawn "stone boat", a sled used in an Australian horse pulling competition 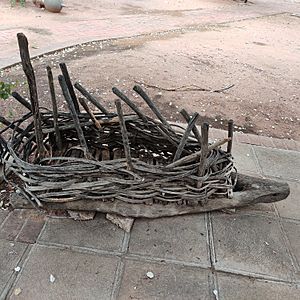 There are several types of recreational sleds designed for sliding down snowy hills (sledding):

A few types of sleds are used only for a specific sport:

Sports that use sleds

All content from Kiddle encyclopedia articles (including the article images and facts) can be freely used under Attribution-ShareAlike license, unless stated otherwise. Cite this article:
Sled Facts for Kids. Kiddle Encyclopedia.