Roald Amundsen was a Norwegian explorer who focused on the poles. He led the first expedition to reach the South Pole and the first that could prove it made it to the North Pole. Amundsen was also the first man known to travel the Northwest Passage. 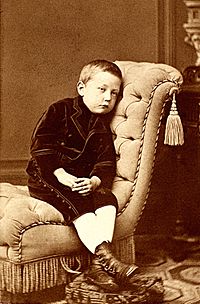 Amundsen in his childhood, 1875 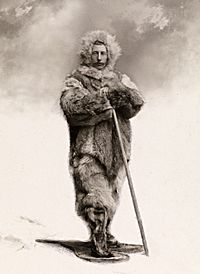 Amundsen was born into a family of Norwegian shipowners and captains in Borge. His parents were Jens Amundsen and Hanna Sahlqvist. Roald was the fourth son in the family.

When Amundsen was young, he decided he would use his life to explore the wilderness. He was inspired by the lives of Fridtjof Nansen and John Franklin. However, his mother wanted him to avoid the family maritime trade and encouraged him to become a doctor, a promise that Amundsen kept until his mother died when he was aged 21. He promptly quit university for a life at sea.

In 1897, he went on the Belgian Antarctic Expedition as first mate. This was the first expedition to stay over winter at Antartica, since their ship got stuck in the ice preventing them from leaving.

In 1903, Amundsen led the first expedition to make it through the Northwest Passage.

He disappeared in June 1928 while taking part in a rescue mission.

All content from Kiddle encyclopedia articles (including the article images and facts) can be freely used under Attribution-ShareAlike license, unless stated otherwise. Cite this article:
Roald Amundsen Facts for Kids. Kiddle Encyclopedia.