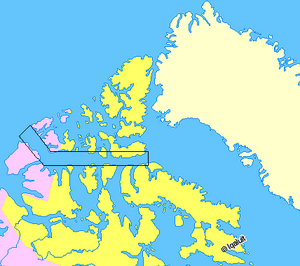 Map indicating the Parry Channel. The east–west part is normally passable in late summer, but the west end which turns northwest (the McClure Strait) is normally filled with ice.

The Parry Channel is a natural waterway through the central Canadian Arctic Archipelago. Its eastern two-thirds lies in the territory of Nunavut, while its western third (west of 110° West) lies in the Northwest Territories. It runs east to west, connecting Baffin Bay in the east with the Beaufort Sea in the west. Its eastern end is the only practical entrance to the Northwest Passage. Its western end would be a natural exit from the archipelago were it not filled with ice. The channel separates the Queen Elizabeth Islands to the north from the rest of Nunavut.

Parry Channel is named after Arctic explorer William Edward Parry, who in 1819 got as far as Melville Island before being blocked by ice at the McClure Strait. The next ship to get this far west was part of the Edward Belcher expedition in 1850.

All content from Kiddle encyclopedia articles (including the article images and facts) can be freely used under Attribution-ShareAlike license, unless stated otherwise. Cite this article:
Parry Channel Facts for Kids. Kiddle Encyclopedia.