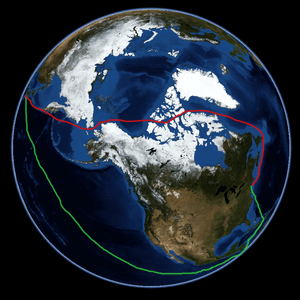 The Northwest Passage is sea passage along the north coast of North America, through the Arctic Ocean. Because of ice, the passage is usually closed to ships.

The Spanish Empire wanted to reach Asia by a western route, because Portugal controlled the eastern route around the Cape of Good Hope. Spain wanted to have a route that it could control. This caused most European countries to search for a possible route. Roald Amundsen was the first person to navigate the passage between 1903 and 1906.

Global warming is increasing the melting for the Passage.

All content from Kiddle encyclopedia articles (including the article images and facts) can be freely used under Attribution-ShareAlike license, unless stated otherwise. Cite this article:
Northwest Passage Facts for Kids. Kiddle Encyclopedia.