Kids Encyclopedia Facts
This page is about the UK art galleries. For other uses, see Tate (disambiguation).

The former logo was designed by Wolff Olins in 2000 and used in several similar versions and colours.

Tate is an institution that houses the United Kingdom's national collection of British art, and international modern and contemporary art. It is a network of four art museums: Tate Britain, London (until 2000 known as the Tate Gallery, founded 1897), Tate Liverpool (founded 1988), Tate St Ives, Cornwall (founded 1993) and Tate Modern, London (founded 2000), with a complementary website, Tate Online (created 1998). Tate is not a government institution, but its main sponsor is the UK Department for Culture, Media and Sport.

The name 'Tate' is used also as the operating name for the corporate body, which was established by the Museums and Galleries Act 1992 as 'The Board of Trustees of the Tate Gallery'.

The gallery was founded in 1897, as the National Gallery of British Art. When its role was changed to include the national collection of modern art as well as the national collection of British art, in 1932, it was renamed the Tate Gallery after sugar magnate Henry Tate of Tate & Lyle, who had laid the foundations for the collection. The Tate Gallery was housed in the current building occupied by Tate Britain, which is situated in Millbank, London. In 2000, the Tate Gallery transformed itself into the current-day Tate, or the Tate Modern, which consists of a federation of four museums: Tate Britain, which displays the collection of British art from 1500 to the present day; Tate Modern, which is also in London, houses the Tate's collection of British and international modern and contemporary art from 1900 to the present day. Tate Liverpool has the same purpose as Tate Modern but on a smaller scale, and Tate St Ives displays modern and contemporary art by artists who have connections with the area. All four museums share the Tate Collection. One of the Tate's most publicised art events is the awarding of the annual Turner Prize, which takes place at Tate Britain. 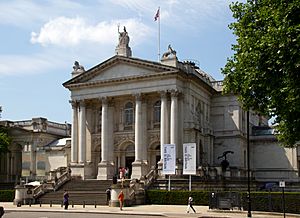 In 1915, Sir Hugh Lane bequeathed his collection of European modern art to Dublin, but controversially this went to the Tate, which expanded its collection to include foreign art and continued to acquire contemporary art. In 1926 and 1937, the art dealer and patron Joseph Duveen paid for two major expansions of the gallery building. His father had earlier paid for an extension to house the major part of the Turner Bequest, which in 1987 was transferred to a wing paid for by Sir Charles Clore. Henry Courtauld also endowed Tate with a purchase fund. By the mid 20th century, it was fulfilling a dual function of showing the history of British art as well as international modern art. In 1954, the Tate Gallery was finally separated from the National Gallery. 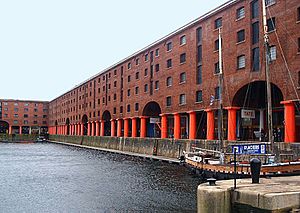 During the 1950s and 1960s, the visual arts department of the Arts Council of Great Britain funded and organised temporary exhibitions at the Tate Gallery including, in 1966, a retrospective of Marcel Duchamp. Later, the Tate began organising its own temporary exhibition programme. In 1979 with funding from a Japanese bank a large modern extension was opened that would also house larger income generating exhibitions. In 1987, the Clore Wing opened to house the major part of the Turner bequest and also provided a 200-seat auditorium. (The "Centenary Development," in 2001, provided improved access and public amenities) 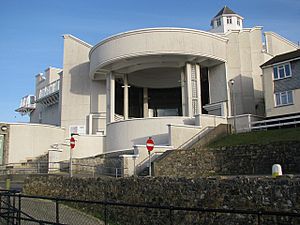 In 1988, an outpost in north west England opened as Tate Liverpool. This shows various works of modern art from the Tate collection as well as mounting its own temporary exhibitions. In 2007, Tate Liverpool hosted the Turner Prize, the first time this has been held outside London. This was an overture to Liverpool's being the European Capital of Culture 2008.

In 1993, another offshoot opened, Tate St Ives. It exhibits work by modern British artists, particularly those of the St Ives School. Additionally the Tate also manages the Barbara Hepworth Museum and Sculpture Garden, which opened in 1980. 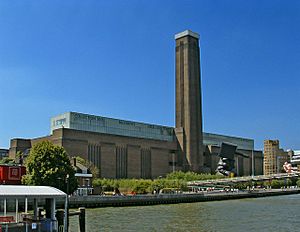 Neither of these two new Tates had a significant effect on the functioning of the original London Tate Gallery, whose size was increasingly proving a constraint as the collection grew. It was a logical step to separate the "British" and "Modern" aspects of the collection, and they are now housed in separate buildings in London. The original gallery is now called Tate Britain and is the national gallery for British art from 1500 to the present day, as well as some modern British art. Tate Modern, in Bankside Power Station on the south side of the Thames, opened in 2000 and now exhibits the national collection of modern art from 1900 to the present day, including some modern British art. In its first year, the Tate Modern was the most popular museum in the world, with 5,250,000 visitors.

Sir Nicholas Serota has been the director of the Tate since 1988, when he took over from Sir Alan Bowness.

In the late 2000s, the Tate announced a new development project to the south of the existing building. According to the museum: "This new development will transform Tate Modern. An iconic new building will be added at the south of the existing gallery. It will create more spaces for displaying the collection, performance and installation art and learning, all allowing visitors to engage more deeply with art, as well as creating more social spaces for visitors to unwind and relax in the gallery." Arts philanthropist John Studzinski donated more than £6 million to the project.

Tate Online is the Tate's website. Since its launch in 1998, the site has provided information on all four physical Tate galleries (Tate Britain, Tate St Ives, Tate Liverpool and Tate Modern) under the same domain. Tate Online helps visitors prepare and extend visits to the physical sites but also acts as a destination in its own right. Other resources include illustrated information on all works in Tate's Collection of British and Modern international art, structured and informal e-learning opportunities for all visitors, over 600 hours of archived webcast events, all articles from the magazine Tate Etc., and a series of bespoke net art commissions. BT was the primary sponsor of Tate Online from 2001 to 2009.

In addition to providing information about the galleries and organisation, Tate Online has been used as a platform for Internet art exhibits, termed Net Art, which are organised as part of Tate's Intermedia Art initiative covering new media art. So far, 13 net art exhibitions have been shown since the initiative started in 2000 including Tate in Space (2002) which was nominated in the Interactive Art category for the 2003 BAFTA Interactive awards.

The Tate Online Shop sits under the main Tate site and offers a wide range of books, prints and products that reflect and support the primary goal of Tate: to promote the knowledge, understanding and enjoyment of art. Profits from the online shop help to support the work of the galleries.

The Tate logo was designed by international brand consultancy Wolff Olins in 2000 as part of a larger rebranding effort focused around the idea "look again, think again." The museum uses a range of logos that move in and out of focus, "suggesting the dynamic nature of Tate – always changing but always recognizable" Variations include a standard logo, a blurred version, a faded version and a halftone version consisting of dots rather than smooth fading. An update on the brand, designed by North, was released in 2016.

All content from Kiddle encyclopedia articles (including the article images and facts) can be freely used under Attribution-ShareAlike license, unless stated otherwise. Cite this article:
Tate Facts for Kids. Kiddle Encyclopedia.