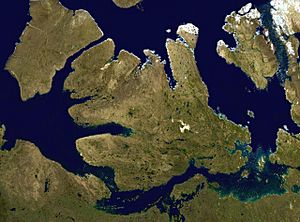 Victoria Island is an island in the Canadian Arctic Archipelago and the border between Nunavut and the Northwest Territories runs through the island. It is the 9th biggest island of the world, and at 217,291 square kilometres (83,897 sq mi) is Canada's second largest island and nearly double the size of Newfoundland (or only slightly bigger than the size of the island of Great Britain). The western third of the island belongs to the Inuvik Region in the Northwest Territories and the rest is part of Nunavut's Kitikmeot Region.

All content from Kiddle encyclopedia articles (including the article images and facts) can be freely used under Attribution-ShareAlike license, unless stated otherwise. Cite this article:
Victoria Island (Canada) Facts for Kids. Kiddle Encyclopedia.