Cape Airy is located at the island's southwestern extremity. Also on the southwestern coast, Griffith Island lies directly across from the island's only hamlet Resolute (Qausuittuq), separated by the 6.5 mi (10.5 km) wide Resolute Passage. The airport at Resolute acts as a communications hub for the central Arctic islands of Nunavut. This is Canada's second most northerly public community and has a population of 198 in 2016.

Cornwallis Island is also home to microbiological colonies known as hypoliths, from their tendency to take hold under ("hypo") stones ("lith"). 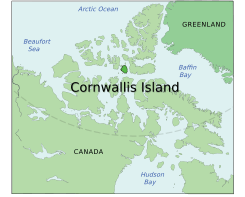 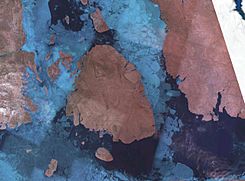 All content from Kiddle encyclopedia articles (including the article images and facts) can be freely used under Attribution-ShareAlike license, unless stated otherwise. Cite this article:
Cornwallis Island (Nunavut) Facts for Kids. Kiddle Encyclopedia.