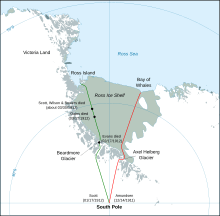 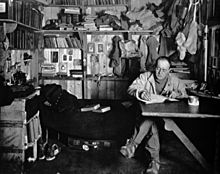 Scott, writing his journal in the Cape Evans hut, winter 1911

Scott's group took this photograph of themselves using a string to operate the shutter on 17 January 1912, the day after they discovered Amundsen had reached the pole first.

Captain Robert Falcon Scott CVO, RN (6 June 1868 – 29 March 1912) was an English Royal Navy officer and explorer who died on an expedition to the South Pole. He is widely known as Scott of the Antarctic, the title of a 1948 movie.

It was the chance for personal distinction that led Scott to apply for command of the Discovery. His name became associated with the Antarctic, his field of work for the final twelve years of his life.

During this second venture, Scott led a party of five which reached the South Pole on 17 January 1912, only to find that Roald Amundsen's Norwegian expedition had got there first. On the return journey, Scott and his four comrades died from exhaustion, starvation and extreme cold. The tragic fate of his expedition is still remembered throughout the world.

After his death, Scott became a British hero. His reputation suffered from several books written later in the 20th century. Still later, Scott's record was reviewed more favourably. The main cause of the failure of the expedition is now said to be the exceptionally adverse weather at the end of the return from the pole.

Scott took ponies, motorised sleds and ordinary sleds, which he and his men pulled. He thought that the number of animals overworked and killed should be held as low as possible and considered his rival Roald Amundsen's approach as cruel. Amundsen, on the other hand, killed dog after dog to feed himself, the men and the rest of the dogs. He did not feel bad about it. The ponies helped travelling part of the way to the pole, but some of them were so stubborn that the expedition members, especially Lawrence Oates, lost much energy that was needed to get back from the pole. The motorised sleds (which worked well at the start) eventually froze up. The dogs, of which there 36, were left behind on the final attempt on the Pole.

One factor which has been re-discovered is that Scott gave the dog driver Meares written orders before leaving for the final attempt on the pole. The order was for dogs to be brought up towards the returning party. This order was supplemented by Scott asking Atkinson to make a similar attempt (Atkinson was one of those not chosen for the final attempt group). In the event, neither of these actions took place.

All content from Kiddle encyclopedia articles (including the article images and facts) can be freely used under Attribution-ShareAlike license, unless stated otherwise. Cite this article:
Robert Falcon Scott Facts for Kids. Kiddle Encyclopedia.