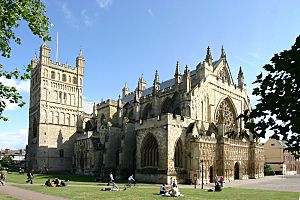 The side of the cathedral 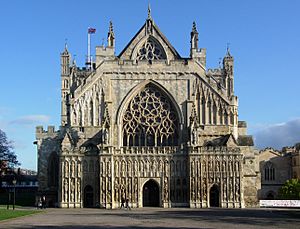 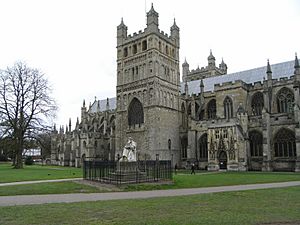 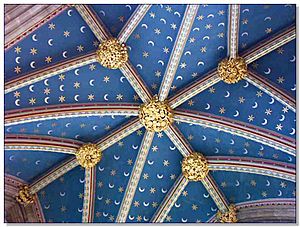 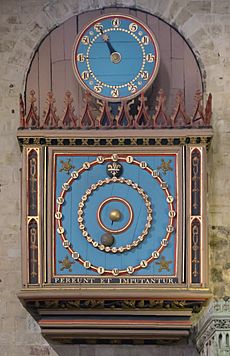 Exeter Cathedral is an Anglican cathedral in the city of Exeter, Devon, in the southwest of England. It is the seat of the Bishop of Exeter. The present building was complete by about 1400, and has the longest uninterrupted vaulted ceiling in England, and other notable features. The cathedral is built in Gothic style.

In 1107, William Warelwast, a nephew of William the Conqueror, was appointed to the see, and this was the catalyst for the building of a new cathedral in the Norman style. Its official foundation was in 1133, after Warelwast's time, but it took many more years to complete. In 1258 the building was already outmoded, and it was rebuilt in the Decorated English Gothic architecture style, following the example of nearby Salisbury Cathedral. However, much of the Norman building was kept, including the two massive square towers and part of the walls. It was constructed entirely of local stone, including Purbeck Marble. The new cathedral was complete by about 1400, apart from the addition of the chapter house and chantry chapels.

On 4 May 1942, an early morning air raid took place over Exeter. The cathedral sustained a direct hit by a large high-explosive bomb on the chapel of St James, completely demolishing it. The muniment room above, three bays of the aisle and two flying buttresses were also destroyed in the blast. The medieval wooden screen opposite the chapel was smashed into many pieces by the blast, but it has been reconstructed and restored. Fortunately many of the cathedral's most important artifacts, such as the glass of the great east window, the misericords, the Exeter Book, the bishop's throne and the Bronescombe Effigy, had been removed at the start of the war in anticipation of such an attack. Subsequent repairs and the clearance of the area around the western end of the building uncovered portions of earlier structures, including remains of the Roman city and of the original Norman cathedral.

The clock is one of a group of famous 14th to 16th century astronomical clocks to be found in the West of England. Another one is at Wells Cathedral.

The main, lower, dial is the oldest part of the clock, dating from 1484. The fleur-de-lys 'hand' indicates the time (and the position of the sun in the sky) on a 24-hour analogue dial. The numbering consists of two sets of I-XII Roman numerals. The silver ball and inner dial shows both the age of the moon and its phase (using a rotating black shield to indicate the moon's phase). The upper dial, added in 1760, shows the minutes.

The Latin phrase Pereunt et Imputantur, a favourite motto for clocks and sundials was written by the Latin poet Martial. It is usually translated as "they perish and are reckoned to our account", referring to the hours that we spend, wisely or not. The original clockwork mechanism was much modified, repaired, and neglected until it was replaced in the early 20th century. The door below the clock has a round hole near its base. This was cut in the early 17th century to allow entry for the Bishop's cat to deter vermin. The vermin were attracted to the animal fat used to lubricate the clock mechanism.

All content from Kiddle encyclopedia articles (including the article images and facts) can be freely used under Attribution-ShareAlike license, unless stated otherwise. Cite this article:
Exeter Cathedral Facts for Kids. Kiddle Encyclopedia.