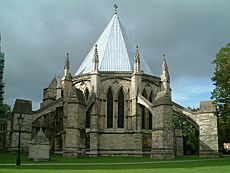 The Chapter house at Lincoln Cathedral. Note the flying buttresses surrounding the building. 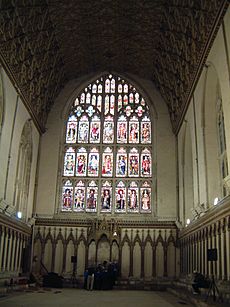 The chapter house of Canterbury Cathedral

A Chapter house or chapterhouse is a special building or room attached to a cathedral or large church. It is where the cathedral chapter meetings are held. Chapter houses were also built in mediaeval monasteries.

In a cathedral, the chapter is always chaired by the Dean, whose job it is to run (manage) the cathedral. Members of the chapter will include Canons, who may include top lay officials as well as priests. It is a management group for the cathedral.

The side of the cloister with the chapter house was usually the first to be constructed; it would have been started shortly after the church’s frame was put up.

The community of monks would meet in the chapter house with the Abbot to 'hold chapter'. This meant to read aloud from the rule book and Bible, and to discuss matters concerning the monastery and its monks. The meetings generally took place in the morning, after mass; the monks would sit along the length of the walls in strict age-order. At the end of the meeting the monks would publicly confess their sins or denounce others' (anonymously).

All content from Kiddle encyclopedia articles (including the article images and facts) can be freely used under Attribution-ShareAlike license, unless stated otherwise. Cite this article:
Chapter house Facts for Kids. Kiddle Encyclopedia.